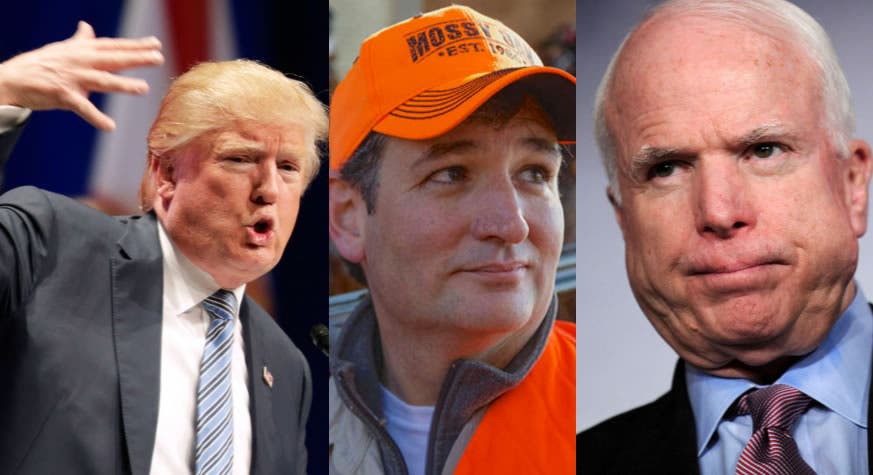 Donald Trump has claimed crazy Sarah Palin’s endorsement after both he and Ted Cruz actively begged Alaska’s former half-term Governor Sarah Palin for her crucial nod as the first caucus looms at the start of next month. The politician-turned-reality-TV-personality announced her endorsement of the reality tv personality-turned- politician today, ditching the Texas Senator whose career she made in 2010 in favor of Trump. Can the Republican Party get any lower than this? The top two Republican presidential candidates can’t get enough of the grizzly bear hunting, grammar mangling former Republican candidate for Vice President and her Facebook posts filled with word salad, and now she’s gone to the lowest common denominator candidate.

The last “influential” Republican left that’s still close with Sarah Palin spoke out on the civil war going on behind the scenes between two men who are barely qualified for anything. Bristol Palin is a former National Campaign to Prevent Teen and Unplanned Pregnancy volunteer, who herself got pregnant at the age of 17 – while her mother Sarah was running for national political office.  Bristol published a humble-brag laden story earlier today which outed Cruz’s slavish belief in salvation by her Momma Grizzly and arguing why her mother should pick Trump in a post titled, “Is THIS Why People Don’t Like Cruz?” on the “Patheos” website whose slogan is ‘hosting the conversation on faith’:

Is my Mom going to endorse Donald Trump for President of the United States?  That’s the rumor, and I’ve been too busy with diapers to delve too much into politics these days. But the rumors were enough to cause staffers from Ted Cruz’s office to slam my mom. After hearing what Cruz is now saying about my mom, in a negative knee-jerk reaction, makes me hope my mom does endorse Trump. Cruz’s flip-flop, turning against my mom who’s done nothing but support and help him when others sure didn’t, shows he’s a typical politician.

Bristol Palin shared a video in her post, in which Ted Cruz described the impact Sarah Palin had on his political career in a video posted to her Sarah PAC youtube channel, “I was at 2% in the polls. We didn’t have a prayer. And at the absolutely pivotal moment, Governor Palin came down to Texas. She stood with Heidi & me on that stage, in her cowboy boots. Standing and telling Texans, ‘we can stand together, we can turn this country around.’ It transformed that campaign.  That’s right, the disingenuous Senator Ted Cruz (R-TX) who we thought owes his entire political livelihood to liquidating his savings but instead got a million dollars in loans from Goldman Sachs and Citibank which he failed to report, actually owes his entire political career to Sarah Palin.

Now we can blame Sarah Palin too for enabling Cruz’s ridiculous campaign to shut down the US Government because… Obamacare? That shutdown squandered $24 billion dollars in tax money.

In fact, Ted Cruz was so completely desperate to collect the endorsement from his Mama Bear, that he didn’t even wait to be spurned. He bit the hand that fed his fledgling political career yesterday when Cruz’s spokesman lashed out on CNN’s New Day, leveling a Tea Party purity charge at Palin, because the very woman to whom he owns his political career prefers an even more despicable Republican candidate, the minority-hating Donald Trump. Meanwhile, Donald Trump has been full on Palin pandering since last August when the anti-immigration reality tv star delivered a “scoop” interview to Palin on OAN where he fielded softball political questions from Palin like this: “You’re seeing some idiots in the press and they’re misrepresenting your exchange the other day with the political activist, the father of the Clinton staffer, Univision’s Jorge Ramos and you schooled that radical activist and it was the right thing to do, I don’t think he’s going to pull that again. Where did you get your guts for that kind of necessary confrontation?”

We don’t know what’s gone on between Trump and Palin behind the scenes since then, but Sarah PAC was down to just $560,000 in the June 2015 report after maintaining much higher balances in previous semi-annual reports. There’s not a new financial filing and with her network news job vanished, Palin might see Trump as more than just someone to endorse, but her ticket to more money and/or relevance. We won’t know how much Palin collected this month until mid-summer either, but she can’t help but see other Republican PACs which are so filled with cash they’re sending out videos by Fedex rather than leave anything in the bank. And as Trump has ably pointed out, he’s been very open about his willingness to grease the skids when it comes to paying politicians for play. What Republican wouldn’t cash in their political apprentice for a return ticket to the spotlight?

In 2008 people on the right claimed that Sarah Palin created a new brand of politics, but all she managed to accomplish was a hasty exit from the Governor’s mansion in Alaska. How quickly did the right-wing forget the litany of laughable candidates inspired by Sarah Palin who lost elections during the Tea Party’s heyday? Who could ever forget the Christine O’Donnell for Senate commercial which starts off, “I’m not a witch… I’m you?” In fact, Ted Cruz was Palin’s only ally to win a major contest in 2010, six long years ago now, and she’s ready to toss him overboard for a toupee wearing TV personality.

Sarah Palin’s new brand of politics took the former Mayor of Wasilla onto Fox News for regular rants until even those “liberal media elites” got sick of her mindless and factless commentary, terminating her contract and relegated her to a program on the Sportsman Channel.  But some Republicans are still obsessed with the woman who lost in 2008 along with Arizona Senator John McCain (who himself calls Cruz a “wacko-bird”), whose fact-free appeals launched the know-nothing wing of their party, spawning the “get your government hands off my Medicaid” crowd to metastasize into the Tea Party which landed in the hands of the “Trumpeterians.” But a clown car primary like the Republicans wouldn’t truly be a complete circus without its Ringmaster, and the intense competition between Cruz and Trump clearly shows that the GOP’s bearded lady has escaped the sideshow and taken center stage.

Fortunately, this electoral drama between dumb and dumber won’t end with a sequel, because neither of these idiots are going anywhere.