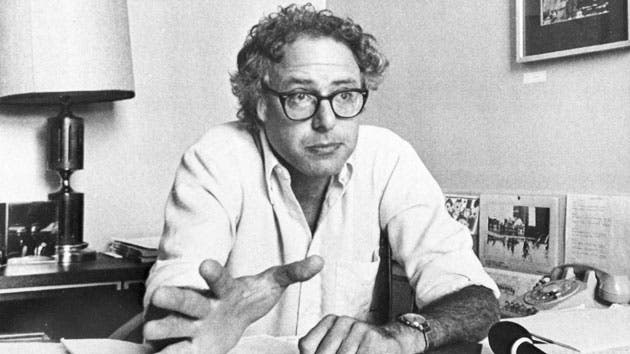 University of Chicago newspaper clippings from 1963 show how even in college, young Bernie Sanders spoke out for racial justice, was the Chairman of the UC’s chapter of the Congress for Racial Equality (CORE) and even got arrested and convicted of resisting arrest, and paid a (then) steep fine of $25. Most of Sanders’ activities were local to Hyde Park, the same neighborhood where President Obama lived when he served as just the honorable Senator from Illinois. University of Chicago was founded in 1890 with an unusual commitment to gender equality for its time, with “a commitment to offering a rigorous academic program and an ambition to provide ‘opportunities for all departments of higher education to persons of both sexes on equal terms,'” according to their website, but the gender equal school was  quietly practicing racial discrimination until Bernie arrived.

Sanders transferred from Brooklyn College to U.C. in 1961, when it was known as a bastion of progressivism and but unbeknownst to the young political science major with better kept hair, the school’s image betrayed a foul secret. Sanders discovered that racially segregated housing in Chicago’s mostly African-American “south side” wasn’t just private owners, but that the University of Chicago itself owned segregated apartment buildings.

That’s right – the supposedly liberal, northern institution of higher learning was outright refusing to rent to its own students based on the color of their skin. UC’s student newspaper, the Chicago Maroon, made the startling discovery buried within a mundane budget. Instead of reporting it right away, they instead sent out test renters to visit half a dozen homes and compare the results between white and black potential renters. None of the African-American renters were given leases, the white students were welcomed. These incidents took place six years before the federal Fair Housing Act was enacted prohibiting housing discrimination, which ended UC’s dishonorable rental practices too.

Incidentally, that is the same the federal law Donald Trump’s family business was accused of violating by federal prosecutors in 1973 and the feds used relatively the same investigatory tactics to catch the Trump Management Organization.  If you want to know how awful racial discrimination affected those who lived in Trump’s then segregated housing, look no further than e folk musician and songwriter Woody Guthrie’s stark account of the horrors of being in a Trump building in New York during that era.

UC CORE organized a 15 day sit-in aimed at convincing George Beadle – then president of the university and a 1958 Nobel Laureate for genetics research – to integrate the off-campus homes owned by the university. The University had bought nearly 10% of the homes in Hyde Park to combat a blatant racially motivated housing practice long since banned for spreading hatred known as “blockbusting” where realtors would scare away white families by claiming that black families would move in. But they kept the many rental apartments segregated infuriating students for the school’s hypocritical handling of the situation.

Thirty three students protested for those 15 days. It made national news. Then finally, a compromise was reached, and Beadle addressed 300 students with Bernie Sanders on the podium to announced a Committee to study the issue. But soon afterwards, a furious Sanders penned a piercing editorial about the “double cross” in the student newspaper – as you can see below – for refusing to answer tough questions as promised. The university bought time until final exams arrived, so Bernie’s forceful editorial noted that tables would be setup to solicit community comments and raise a few nickels (back then, nickels were worth something, that $25 fine would be equivalent to $195 today) and continue to use public pressure to force the university’s hand.

Sanders later protested segregated restaurant service at Howard Johnson aka HoJo in 1962, according to the Chicago Maroon, in nearby Cicero, Illinois. Economic boycotts and picketing were far more frequent occurrences back then, than today. However, heavy handed police tactics probably had a lot to do with that. The following year, Sanders and 158 other UC Core members were arrested for resisting arrest racial equality protests at “south side” Chicago schools. As any decent criminal defense lawyer today might tell you, without an underlying crime to be arrested for committing (like trespassing, assault, theft, etc.) there’s no legitimate arrest to resist, but that’s apparently never stopped Chicago PD from making the arrests then or now, and it’s never stopped crooked judges bent on keeping segregation from trying and convicting activists for a charge that’s become famous as a “contempt of cop” citation.

Of the 159 protesters who were arrested, 22 were convicted with suspended fines, 133 protesters had their cases dismissed, and Bernie Sanders was one of 4 student equality protesters nailed with a hefty fine of $195 in today’s terms, especially hefty on a college student’s budget. Ironically, if today’s NYPD had its way, the next Bernie Sanders would be a felon, forever unable to get a business license, discriminated in housing choices and probably never able to become a productive member of society based on the legal discrimination imposed by America’s last bastion of legal discrimination, the ability to shun those convicted of a felony crime. Numerous Occupy Wall Street protesters and the more recent NYC Shut It Down protest marchers who’ve been highlighting police brutality each week for the past year every single Monday night, who have been arrested for “resisting arrest” and released shortly thereafter because of the cops illegal use of authority would be potential felons for speaking their minds.

According to PINAC News:

Leaving aside the mountain of evidence that increasing the penalty for crimes does not deter potential criminals, the NYPD’s use of “resisting arrest” is often merely an excuse to justify an officer’s use of excessive force.  “The vast majority [of charges] might end up being dismissed,” Commissioner Bratton said. “We’re asking district attorneys to treat them more seriously than they have been treated in the past.” Bratton added that to police abuse, the NYPD would use its own stat-tracking system to monitor which officers had charges that are eventually dropped.  Knowing the dubious nature of many “resisting arrest” charges, judges and prosecutors often dismiss such a charge, something members of the NYPD also want to change.

Last week, NYPD Commissioner Bill Bratton presented state legislators with an idea – turn the penalty for resisting arrest from a misdemeanor into a felony. “We need to get around this idea that you can resist arrest,” Bratton said. “You can’t. You just can’t do it. [It] results in potential injury to the officers, to the suspect, and we need to change that. One of the ways to change that is start giving penalties for that.”

While Bernie Sanders didn’t personally change the world himself during the civil rights era, one must appreciate that his racial equality activism in Chicago carried with it risks of more than just fines, but of open physical violence too. Martin Luther King, Jr. was attacked by a mob in 1966 in Chicago, and famously said that, “I have never seen, even in Mississippi and Alabama, mobs as hateful as I’ve seen here in Chicago.”

Unfortunately, the heavy handed tactics of Chicago PD and graduation combined to make Bernie Sanders’ arrest in 1964 at a public school, the last of his known activism during the civil rights era. Sanders gained a practical political education through his activism while in school for political science, and also working on the re-election campaign of a Chicago alderman known for speaking his mind, and loathed by the local political machine for his independence. Some things just don’t change much, do they?