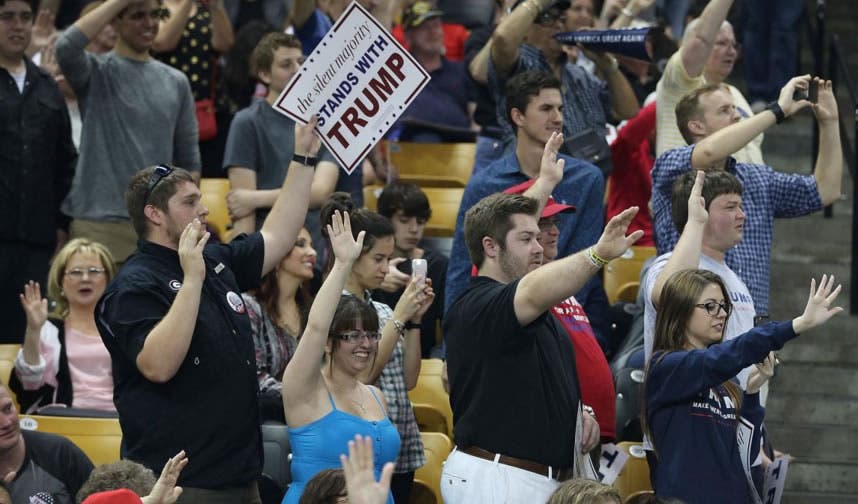 Donald Trump’s rallies have becoming steadily more disturbing as we get deeper into primary season. Violence has become a regular theme, much of it incited and encouraged by Trump himself, targeting protesters and the media in an increasingly fascist show of repression against anyone who dares to question Trump and his methods. Last week, he told his supporters to “beat up” protesters, promising to pay their legal bills. Blacks and Muslims have been forcibly removed from his rallies; a few days ago, a photographer from TIME was choke-slammed to the ground by Trump security.

Which made the spectacle of today’s Trump’s rally in Orlando so much more disturbing. Trump decided to see how far he could go, and declared “let’s do a pledge. Who likes me in this room? I’ve never done this before. Can I have a pledge? A swearing? Raise your right hand.” The crowd happily complied.
The pledge of Trump was as follows: “I do solemnly swear that I, no matter how I feel, no matter what the conditions, if there are hurricanes or whatever, will vote on or before the 12th for Donald J. Trump for president.” The audience repeated it back obediently.

Trump’s rise as a demagogue and a populist rabble-rouser is a shocking thing to see in this day and age. Garnering support through his divisive ethnonationalism and petty racial scapegoating, his narcissim has manifested itself as a direct threat to our national unity and to the integrity of our democracy. It just so happens that on this day in 1933, the Nazi Party won 43.9% of the vote in Germany, paving the way for Adolf Hitler to install a dictatorship not two weeks later.

The rabid beast of nationalism is extremely difficult to contain once it has been unleashed, and we would do well to remember the lessons of the past. While it is extremely unlikely that Trump’s support among working-class whites will translate into a victory in a general election, he has broken every rule and defied every expectation. We must start taking him seriously and treating his campaign with the severity that it deserves; though he continues to amuse us with his puerile shenanigans, the joke is over and it’s not funny anymore.