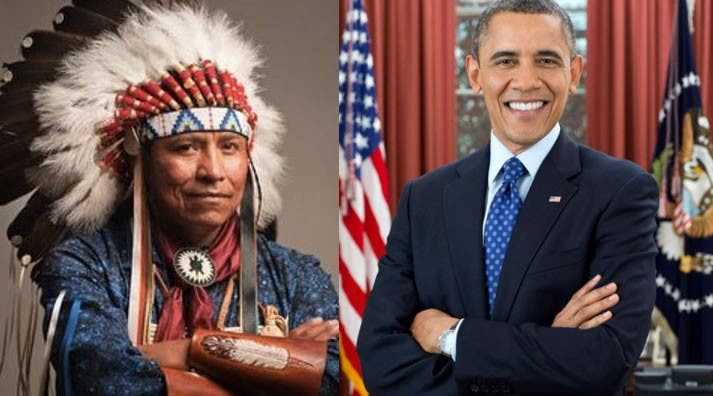 Arizona Tea Partiers are furious with the government after their heinous plot to sell off Native American sacred land to be plundered for corporate profits was foiled by President Obama. Rep. Paul Gosar, along with his accomplices Ann Kirkpatrick, John McCain, and Jeff Flake, managed to throw a last minute amendment into last year’s must-pass military spending bill that hands over the land at Oak Flats – or Chi’chil Bildagoteel to the Apache – to an Australian mining company in an unprecedented show of disrespect to America’s native tribes. And they would’ve gotten away with it too, if it wasn’t for that meddling President!

Over 300 Apache tribesmembers have occupied the site in protest since early 2015 in protest of the sale, determined to protect their ancestral grounds where girls hold their coming-of-age ceremonies. Apache spokesman Wendsler Nosie, Sr. wrote in a powerful letter to the Congressmen that the land of Oak Flats “has always been our connection to our Mother, our right to exist, a central part of our prayers, songs, stories and spiritual practices. It is from here that we emerged. It is who we are. We have lost so much.”

Gosar and Kirkpatrick were unmoved, however, motivated only by the demands of mining lobbyists and the allure of money. They orchestrated a shameful smear campaign that disputes the site’s sacred status and demanded that the Park Service declassify it as a protected area. The Obama Administration, through the Parks Service, instead designated it a historical district, effectively ending their efforts to mine holy grounds.

Gosar promptly threw a tantrum that will bring a smile to your face:

Shame on the Park Service and Forest Service for ramming a bogus historic place listing down the throats of Arizonans. Clearly, the Obama Administration cares more about pandering to extremist environmental groups and a D.C. lobbyist from the Clinton Administration than following the law and listening to the American public. Oak Flat has never been a sacred site, as confirmed by the local tribe’s own former historian. Yet, Obama’s minions are hell-bent on sabotaging an important mining effort by listing a small, public campground 20 miles away from the nearest tribe’s reservation as a historic site.

President Obama and the Park Service have made a strong statement with their defense of Apache religion and the environment. It’s hard to imagine any politician arranging a shady deal to plunder a Christian or Jewish religious site – but clearly the victims of American genocide aren’t worthy of that respect in the eyes of Republicans. Nothing may be sacred to Tea Partiers – but President Obama still knows where his priorities are.

Colin Taylor
Opinion columnist and former editor-in-chief of Occupy Democrats. He graduated from Bennington College with a Bachelor's degree in history and political science. He now focuses on advancing the cause of social justice and equality in America.
Latest Posts
Tags
oak flats obama style tea party