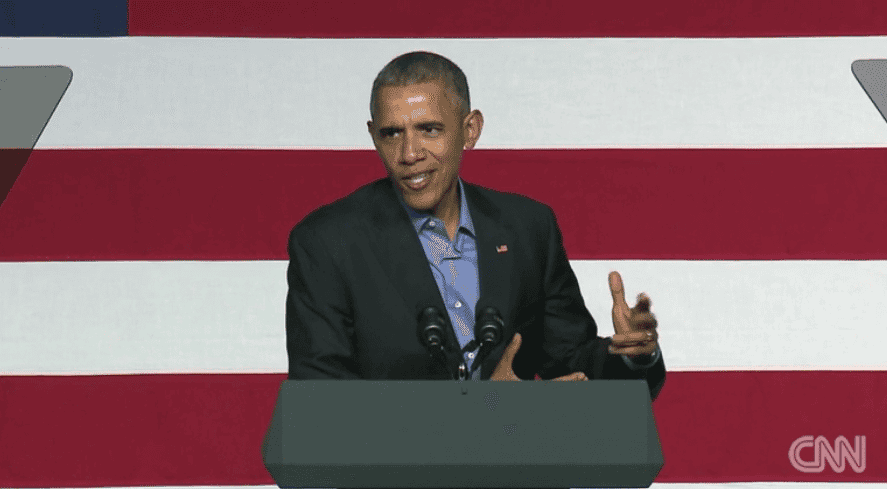 President Obama gave a keynote speech at a South By South West  (SXSW)  Democratic National Committee fundraiser – and in a rare moment of candor, absolutely eviscerated on Donald Trump and the rest of the Republican Party for the undercurrent of racism and hatred that the conservative movement has been cultivating for the past eight years.

The President opened by listing some of his many accomplishments over his unarguably successful presidency. “Imagine what Trump would say if he had this record, instead of selling steaks! Has anybody tried that wine?” he laughed, alluding to the bizarre display of Trump-branded merchandise that was on display during his Michigan primary victory speech, most of which he actually does not own.

He then gave voice to some of the frustration he has undoubtedly had to keep bottled up inside him, unloading on the racist Trump with a streak of vicious sarcasm:

“We’re shocked someone is fanning anti-immigrant or anti-Muslim sentiment! How could you be shocked? This was the guy who was sure I was born in Kenya. And wasn’t letting go… As long as it was being directed at me, they were fine with it! It was a hoot! And suddenly they’re shocked—shocked!—that gambling’s going on in this establishment. We’re shocked! We’re shocked that someone could be loose with the facts—or distort someone’s record. Shocked! [Trump is] a distillation of what has been going on in their party for more than a decade! This is the message that’s been fed—that you just deny the evidence of science. That compromise is a betrayal. That the other side isn’t simply wrong—we disagree—the other side is destroying the country! Or treasonous! Look it up, that’s what they’ve been saying. So they can’t be surprised when somebody says, ‘I can make up stuff better than that. The reaction is something they have to take responsibility for and then make an adjustment!”

It’s very refreshing to hear the President when he has the freedom to speak his mind, if only for a moment. We applaud him for his candor and for calling out the media for being so “surprised” and “confused” by the rise of Donald Trump – they’ve been fanning those flames for years.

Add your name to call on prosecutors to ARREST DONALD TRUMP for his crimes!Advertisements
Tags
obama style sxsw Trump