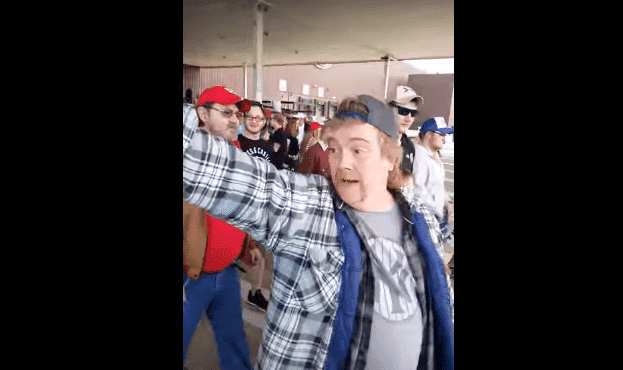 A Trump supporter told a Dutch journalist to “Go To Auschwitz” twice as he departed a rally  As bigger votes near, Donald Trump’s racist supporters are showing their true colors. The orange-faced white supremacist, Republican candidate for President tried to hold a Saturday rally at University of Illinois at Chicago Pavilion where one of his supporters went viral for showing the proper form for a “Heil H%$^#r” salute. Now, one of Trump’s racist supporters is giving new meaning to the phrase “Damned Yankees.” A white male in his late 30s, wearing a New York Yankees t-shirt gave his best ‘Heil Trump’ salute to Sakir Khader, an Arabic-speaking journalist of apparent Semitic descent, but who is not Jewish and writes for Dutch daily newspaper de Volkskrant. Khader often reports on the Middle East, mainly Syria and Yemēn, according to his twitter profile. Then he told Khader to, “Go to Auschwitz” twice in rapid succession as he walked bye. That’s the name of the most infamous Death Camp run by the Nazi regime during World War II, which killed an estimated million people including jews, the handicapped, Romani people, homosexuals, and political prisoners too.

The tweet went viral when Yair Rosenberg shared it. He’s the editor of Tablet Magazine, the self-described “daily online magazine of Jewish news, ideas, and culture” which is published from New York City, NY. “We’ve long said Trump is a walking internet comments section, but it’s not funny anymore,” Rosenberg said, calling the supporter, “My twitter mentions in real life.” Rosenberg shared a series of tweets after the viral video, which illustrates the daily flood of online white supremacist invective and lunacy which he was referring to, as well as a poignant excerpt from The Atlantic just last month predicting the result of electoral success by Donald Trump to be an explosion of violent race hatred.

Maybe, even the Republican party is finally waking up to the scary, but unavoidable fact of the cauldron of steaming, dehumanizing hatred they brewed up, while spending decades obeying their corporate and 1% masters, while blowing dog whistles to racist party members for decades, creating the welfare queen, Willie Horton, the Southern Strategy and their diabolical support for blowing up education. Sure, there’s a lot of new lunatics registering Republican to vote for Trump – the Kim Davis‘ of the world – but there’s got to be plenty of existing Republicans voting for Trump too because there hasn’t been a 40% surge in GOP voter registration nationally.

But maybe this will finally enlighten the Republican’s obstructionist, segregationist tolerating leaders exactly how serious the problem has become and convince them to broker the convention before voting begins. Because America’s founding fathers foresaw a charlatan like Trump, and our political system evolved specifically to spit out he who might be authoritarian and wish to crown himself King. Make no mistake, Donald Trump has already said he wants to go “outside of the law” to operate, and his glorification and encouragement of violence are the last, and most serious trait, of fascism. This is the result of a Republican political candidate asking his supporters to pledge fealty, when Trump asks supporters to raise their right hand in emulation of the German fascist dictator, which is the most un-American act our nation has ever seen of a political candidate, ever.

The original clip was deleted, so here's a copy: Trump supporter yells "Go to Auschwitz. Go to fucking Auschwitz." pic.twitter.com/iV4ARW969S