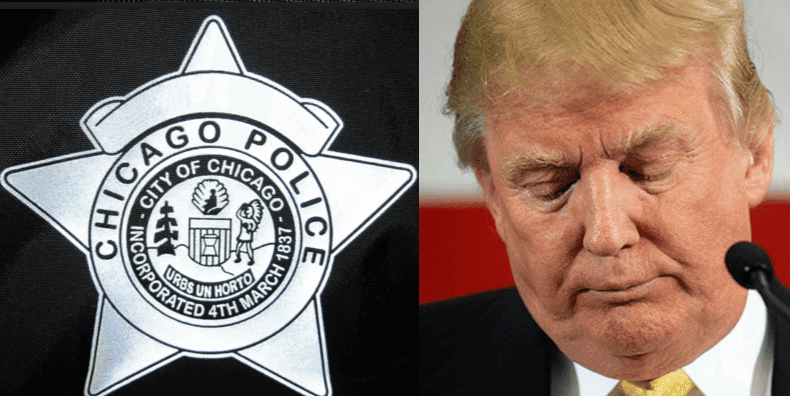 Everyone knows leading Republican Presidential candidate Donald Trump is a world-class pathological liar, ripping pages blatantly out of the pages of bigoted German dictators from World War II. But now, the Republican realtor-in-chief has pulled off the biggest lie yet, hiding his fear of criticism by protsters, then claiming the Chicago police told his campaign that University of Illinois’ Chicago campus had threats to the universally despised GOP candidate. But it’s just not true. Chicago PD said that they had absolutely no problem with securing the 9,000-seat Pavilion which filled with over 4,000 anti-Trump protesters and an equal amount of lunatic, racist supporters of the man who would be known as Donald Drumpf, had his immigrant ancestors not changed the name, and his fortunes.

Trump is a master of the political term appropriately called, the “Big Lie.” Non-partisan fact check website Politifact confirmed this last year, by naming the so-called “short fingered vulgarian,” their ‘Lie of the Year’ since the New York developer and university swindler, never had a single statement rate True in all of 2015. In fact, the racist German dictator, whom Trump emulates even coined the phrase, “große Lüge,” which Trump himself likely knows as the “Big Lie,” since his first wife Ivanna told Vanity Fair in 1990 that he kept the Nazi leader’s speeches in a book by his bedside.

According to that report 26 years ago, “Donald Trump appears to take aspects of his German background seriously. John Walter works for the Trump Organization, and when he visits Donald in his office, Ivana told a friend, he clicks his heels and says, ‘Heil Hitler,’ possibly as a family joke.” Clearly, the laughter has died down in most living rooms in America, the last bit of popcorn has been popped. What was once dismissed as clowning, jokes or his Obama birther-ism cannot any longer be dismissed for anything other than what truly it is: Donald Trump is a neo-Nazi, if not a neo-Fuhrer of his own making on the rise through the ranks of the Republican party. Still don’t believe me? Here’s the “Big Lie” at its finest, in the moments before Trump suffered the first of his four business bankruptcies:

Perhaps his possession of Hitler’s speeches merely indicates an interest in Hitler’s genius at propaganda. The Führer often described his defeats at Stalingrad and in North Africa as great victories. Trump continues to endow his diminishing world with significance as well. “There’s nobody that has the cash flow that I have,” he told The Wall Street Journal long after he knew better. “I want to be king of cash.”

Now, the Donald is blaming Chicago Police – as if they don’t have enough problems already – for canceling his disastrous attempt at a political rally this weekend. The Scots-German trust-fund baby might actually be having second thoughts about his drive to America’s biggest lüge-er. At the least, he’s probably growing just as afraid of his supporters as sane people across the nation have become. Drumpf’s already known for fearing germs and skin contact, classic signs of narcissism. Don’t take my word for it, check out Psychology Today:

Long-standing narcissistic behaviour is not always immediately apparent and the narcissist often becomes highly skilled at getting what they want through charm,deception, passive-aggression, control tactics and manipulation. Narcissists feel they are superior to other people, although it may manifest itself in subtle ways, such as complaining about hotel service or ignoring expert advice. They are preoccupied with achieving success, power, beauty, fame, and wealth, although whatever they do achieve is never enough. They have a complete lack of empathy for others, including their own family and friends, so that they will take advantage of people to get their own needs and desires met, even if it hurts someone.

But voters aren’t arm-chair psychologists, and sadly, Trump already knew what the New York Times just figured out, that his supporters are heavily drawn from the uneducated high-school dropouts, the poor communities sacked by Wall Street and the Republican party are his greatest supporters. Fortunately, Monday night’s rally scheduled in Miami, Florida at the world-famous Doral Resort has already been called off in the face of a massive city-wide call to protest. Hopefully, that’s just a prelude to Trump’s exit from the national political scene as he cuts and runs anywhere mass opposition lines up to exercise their free speech rights.