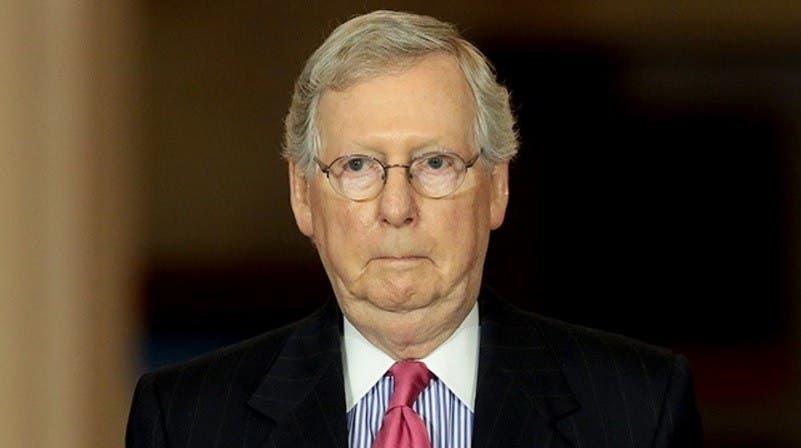 Admittedly, some of these Senators are defying McConnell in a symbolic rather than substantive way, with Portman, Grassley, and Inhofe agreeing only to a “meeting” with Garland while still vowing to block his nomination at all costs. Susan Collins, on the other hand, made a bold gesture for principles over politics in saying that she will give Garland unbiased consideration, explaining that she “views it as [her] job.” Collins’ “view” is indeed correct – it IS the job of the Senate to hold hearings on Supreme Court nominees, no matter if it is an election year or not. Mitch McConnell and Paul Ryan, who even after Obama’s nomination of the moderate Garland have remained intransigent on ignoring the nominee in an effort to ram their far-right ideology down the country’s throat, are doing a tremendous disservice to the American people and to the constitutional principles that they supposedly hold so dear.

In vowing to continue his crusade, McConnell said today about a meeting with Garland “Well, look, I don’t know how many times we need to keep saying this. The Judiciary Committee has unanimously recommended to me that there be no hearings… I don’t know the purpose of such a visit. I would not be inclined to take one, myself.” The only problem with his statement is that none other than Chuck Grassley, the Chairman of the Senate Judiciary Committee, has in fact announced that he will meet with Garland, although he added that “we all know this nomination isn’t going to go anyplace.” The fact that even a meeting with a predetermined outcome is a break from the party line is illustrative of just how toxic and extreme the GOP leadership has become.

The nomination of Garland, a “moderate and politically connected” judge who has repeatedly broken with liberals over his career, further exposed the hypocrisy and misrepresentation of the Republicans’ anti-Obama crusade. Indeed Garland has won widespread praise from Republicans throughout his distinguished career, especially for his prosecution of Timothy McVeigh in the Oklahoma City bombing case, and was confirmed with broad bipartisan support to the D.C. Circuit Court of Appeals in 1997. Seven GOP senators who voted to confirm Garland in 1997 are still sitting.

The most shocking hypocrisy with regards to Garland, illustrative of the mindset of the entire GOP, came from Utah Senator and former Judiciary Committee Chairman Orrin Hatch. When Garland’s name came up as a potential nominee to fill the vacancy left by justice John Paul Stevens in 2010, Hatch said that Garland would be a “consensus nominee” who would “no question” win “bipartisan support.” Then, just last week, Hatch praised Garland and hinted that he would support him if he were nominated, but added that “[Obama] probably won’t do that because this appointment is about the election. So I’m pretty sure he’ll name someone [the liberal base] wants.” Then, lo and behold, once Garland was named, Hatch reversed course, deciding that “his nomination doesn’t in any way change current circumstances” and he “remains convinced that the that the best way for the Senate to do its job is to conduct the confirmation process after this toxic presidential election season is over.”

Of course the Republicans have a near-monopoly on toxicity in the current election cycle, and Hatch’s and the Republicans’ refusal to accept the decidedly moderate Garland have made plain that it is they rather the Democrats who are pushing their hardline ideology at the expense of democracy and good governance. Obama made this clear today when, as usual, he played the bigger man in spite of the Republicans’ childish antics:

It is tempting to make this confirmation process simply an extension of our divided politics, the squabbling that’s going on in the news every day. But to go down that path would be wrong. It would be a betrayal of our best traditions and a betrayal of the vision of our founding documents. This is precisely the time when we should play it straight

The Republicans’ refusal to even meet with Obama’s immensely qualified nominee, much less evaluate him on his merits rather than their own political calculations, should make it clear to the American people that they are refusing to do their jobs in even the most menial sense. They are peddling a backwards and insulting narrative about President Obama and attempting to override the Constitution and the democratic process to maintain conservative dominance of the Supreme Court, all while shouting self-righteously with their usual mixture of hypocrisy and Orwellian doublethink.

James DeVinne
James DeVinne is a student at American University in Washington, DC majoring in International Service with a focus on the Middle East and South Asia. He is a founding member of Occupy Baltimore and interns at the Tahrir Institute for Middle East Policy.
Latest Posts
Tags
mitch mcconell SCOTUS style supreme court