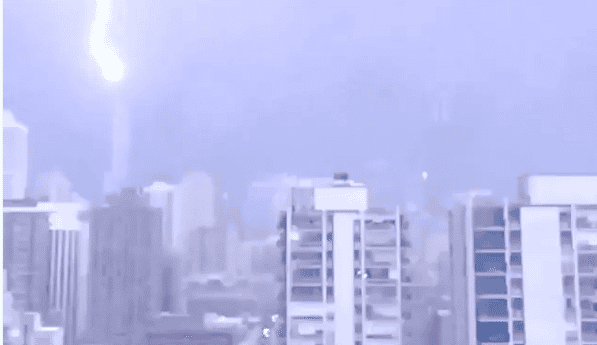 Watch: NBC Catches Trump Being A Lying Coward, Calls Him Out

The heavens made their opinion on Tuesday’s primary results forcefully clear when lightning forked down from the skies and hit the Trump Tower in Chicago.

Donald Trump, of course, won the Illinois primary by a wide margin, taking 39% of the vote in addition to three other states. While we obviously cannot draw too many concrete conclusions from this event, flash of fire and steel is quite poetically appropriate – and is powerfully symbolic of the danger that Donald Trump poses to this country. The presumed GOP nominee today said that he is his own foreign policy adviser, simply because “he has a great brain and says a lot of things.” Clearly a man of terrifying ignorance, one shudders to think of him holding the codes to our nuclear weapons, for which he has expressed a fondness for in the past: “I think – I think, for me, nuclear is just the power, the devastation is very important to me.” The preservation of this country, on the other hand, is very important to the rest of us – which is why we must heed this omen and dedicate our energies towards electing a Democrat in November.