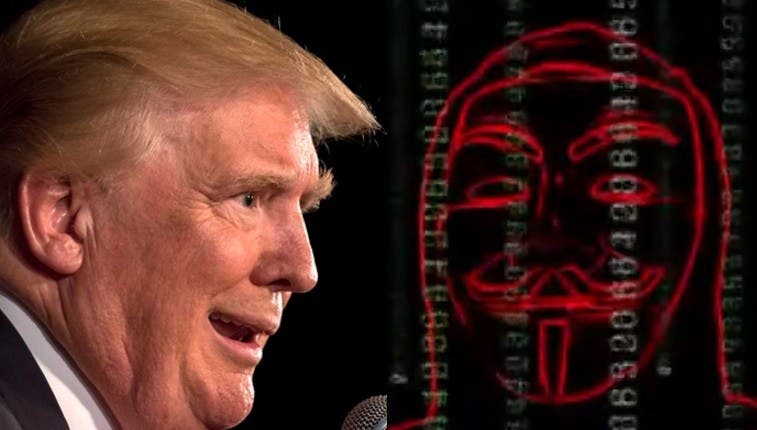 The online “hacktivist” group known as Anonymous has set their sights on Republican front-runner Donald Trump. The notorious racist and darling of white supremacists has been targeted by the campaigns #OpTrump and #OpWhiteRose, a reference to the German resistance movement against Nazism in the Third Reich. Their first salvo was fired today when they released private information about Trump to the internet, including his Social Security number and private cellphone number, to the delight of teenage pranksters nationwide.

They released a video in which the group declares their intentions to oppose the candidate at every turn to punish him for his descent into ethnonationalist demagoguery.

One candidate in particular, Donald Trump, has set his ambitions on the White House, in order to promote an agenda of fascism and xenophobia, as well as the religious persecution of Muslims through totalitarian policies. This candidate has openly promoted violence against peaceful protesters, and his words have even been considered as possibly illegal incitement to violence and rioting by law enforcement,” the statement in the video continues.  ‘Members of the military and law enforcement – even Secret Service – must remember their oaths to defend the Constitution itself, and the nation, against enemies “both foreign and domestic.”

Donald Trump is an enemy of the Constitution and the natural rights it enshrines.

To show that we are very serious about stopping any proposed Fourth Reich by the fascist Donald Trump, we have attached a “gift” of sorts: Trump’s social security number, cell phone number and other details that might be able to assist you all in independently investigating this would-be dictator. These are provided for informational purposes only. Do with them what you will, bearing in mind that you alone are responsible for your actions.

Donald Trump, you should have expected us.

While we don’t condone the releasing of private information to the hive of villainy that is the internet, it couldn’t have happened to a more deserving guy.