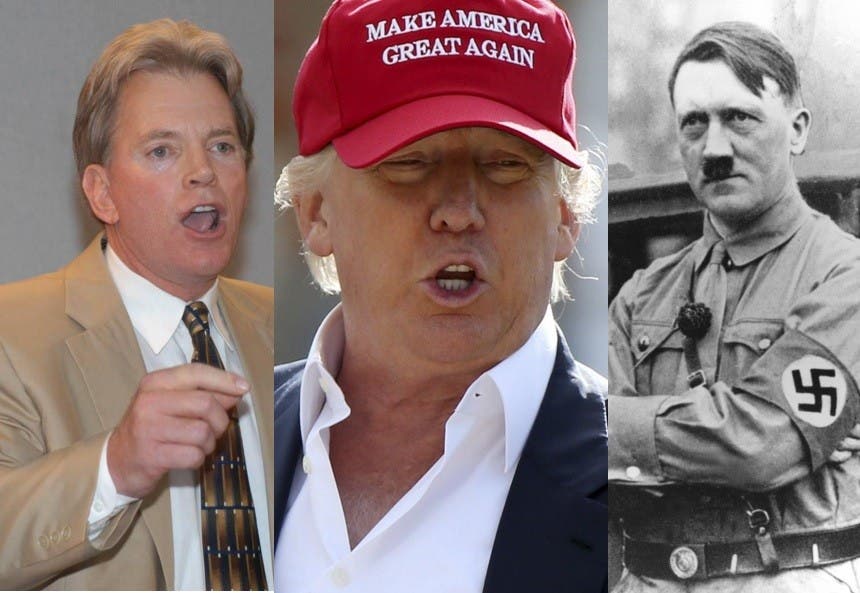 David Duke, former grand wizard of the Ku Klux Klan, is a huge fan of Donald Trump’s white nationalist campaign – especially because it’s helping to “rehabilitate” the image of German dictator Adolf Hitler, who oversaw and orchestrated the most brutal genocide in modern human history.  On a recent radio program, Duke blamed the media for inciting violence against Donald Trump and celebrated Trump for bringing white supremacy back into the public sphere, which would “simply end up making Hitler look like a nicer fellow.”

The truth is, by the way, they might be rehabilitating that fellow with the mustache back there in Germany, because I saw a commercial against Donald Trump, a really vicious commercial, comparing what Donald Trump said about preserving America and making America great again to Hitler in Germany preserving Germany and making Germany great again and free again and not beholden to these Communists on one side, politically who were trying to destroy their land and their freedom, and the Jewish capitalists on the other, who were ripping off the nation through the banking system. We have the same thing going on here…I was amazed, but I don’t think it’s having the effect they want.

Trump supporters dismiss the comparisons to Hitler and the Nazis as hyperbole, but when an actual white supremacist makes the case, it’s hard to argue with. Trump supporters have been caught spray-painting swastikas in churches and attacking minorities across the country. One man shouted “RaHoWa,” (Racial Holy War), gave the Nazi salute, and told a reporter to “go back to f**king Auschwitz.” Though Trump finally decided it was in his best interests to “disavow” Duke’s endorsement, Trump is showing increasingly fascist behavior. He’s proposed overturning the First Amendment to force the media to “tell the truth,” proposed a ban on Muslims entering the country and forcing Muslim-Americans to wear special IDs that invoke the yellow stars that Jews were forced to wear in Nazi Germany, and consistently incites violence at his rallies, prompting to the formation of a “Lion’s Guard” militia to “protect his rallies,” reminiscent of the Nazi Stormtroopers.

White supremacy is very alive in American society, and it is a terrifying sight to behold. There is no denying that Trump, who has a documented fascination with the murderous Nazi leader, is using the same tactics that Hitler did to get himself elected. We cannot allow our nation to even peer down the dark road that a fascist president would lead us down.