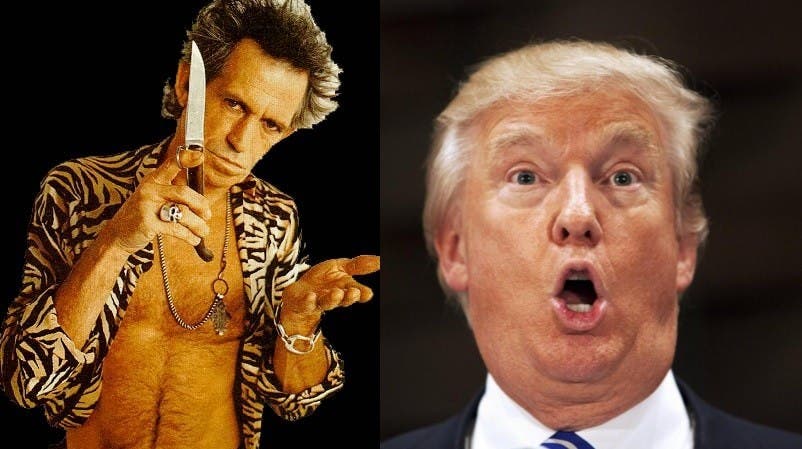 NFL To Georgia: No Super Bowl For You If You Sign Anti-Gay Bill

A new story published by Salon recounts an amazing story of an altercation between the mega-famous rock group the Rolling Stones and Trump, which ended with legendary guitarist and living embodiment of awesome Keith Richards pulling a out knife and a narrowly avoided battle with Trump’s casino goons.

The final show of the Rolling Stones’ 1989 “Steel Wheels” tour was to be played at the Boardwalk Hall in Atlantic City, sponsored by the adjacent Trump Plaza and Casino. Even then, the Stones wanted nothing to do with the abrasive business tycoon, and refused to do the show unless Trump was absent from promotion and from the show itself. “This is all great, but we’re not going to be affiliated with Donald Trump. At all. Screw you.”

Trump then gave his usual excuses (“they begged me to go up!”), which were rejected by Cohl (“Stop it. Don’t make a liar of yourself.”) When Keith Richards heard of Trump’s presence, he fell into a rage, pulled his knife out of his boot and slammed it into the table. “What the hell do I have you [Cohl] for? Do I have to go over there and fire him myself? One of us is leaving the building – either him, or us.”

So Cohl went and fired Trump:

It will come as no great surprise that Trump threw a tantrum. “You don’t know anything! Your guys suck! I promote Mike Tyson! I promote heavyweight fights!” whined Trump. Cohl then describes how the situation almost became violent: “I notice the three shtarkers he’s with, in trench coats, two of them are putting on gloves and the other one is putting on brass knuckles. I go on the walkie-talkie and I call for Jim Callahan, who was head of our security, and I go, “Jim, I think I’m in a bit of trouble.” And he says, “Just turn around.” Cohl found Trump surrounded by forty crew members armed with “tire irons, hockey sticks, and screwdrivers.”

Trump was forced to slink away from the confrontation with his tail between his legs – fired like a dog, as Trump himself is so fond of saying. While not particularly relevant to the election cycle today, this story is a telling glimpse into what kind of man Donald Trump really is, highlighting how he cannot control his insatiable hunger for the limelight and his willingness to break contracts in order to satisfy his ravenous ego. It does not bode well for the countless international agreements that our country is legally bound to uphold that Trump was willing to risk a $3 million site fee just because he wanted some time in the spotlight. That is not good business, and it’s just more proof that we may have never seen a presidential candidate this unqualified for the office.
h/t to Salon
Click to see why you should help our veterans by calling your Senators today.