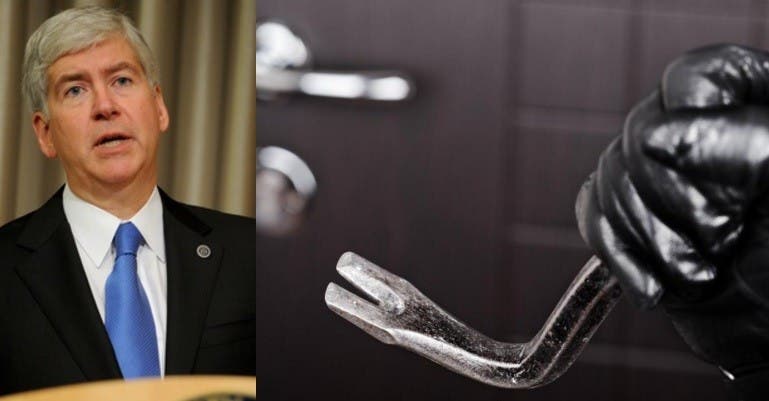 The drama swirling around Michigan Governor Snyder’s office has just gotten much more interesting. In a shocking story that slipped under the national radar in December, the executive office that held important documents relating to Flint’s water management was broken into and burglarized – just days before the federal government opened an investigation into the Governor’s office over the mass poisoning of the people of Flint.

New police chief Tim Johnson had a shocking announcement to make: “It was definitely an inside job. The power cord (to the TV) wasn’t even taken. The average drug user knows that you’d need the power cord to be able to pawn it. It was somebody that had knowledge of those documents that really wanted to keep them out of the right hands, out of the hands of someone who was going to tell the real story of what’s going on with Flint water.”

A window was broken into, and no other offices were disturbed. “They had to know what room to go into” said Mayor Karen Weaver. Unfortunately, police have said that “we may never know” what went missing in that office – and that is unacceptable. The break-in was timed for the Christmas holidays, when everyone’s attention was occupied. The break-in wasn’t discovered until the 28th, when employees returned to work.

The suspicious nature of the break-in and the long trail of emails showing that Snyder and his office conspired to hide the lead contamination in Flint’s exorbitantly expensive water would seem to indicate that they also conspired to seize evidence that could implicate the Governor’s office for knowingly poisoning thousands of innocent people, which will cause permanent brain damage in up to 8,000 children.

The people of Flint and the rest of the nation deserve answers for how this atrocity was allowed to happen – and to know exactly what role the Governor’s office played in perpetrating and covering up the poisoning. It is an absolute travesty that Rick Snyder still continues to draw a salary and is attempting to use millions in taxpayer funds to pay his high-priced lawyers to weasel his way out of facing justice for his laundry list of crimes.

It appears that list may be longer than we originally suspected.