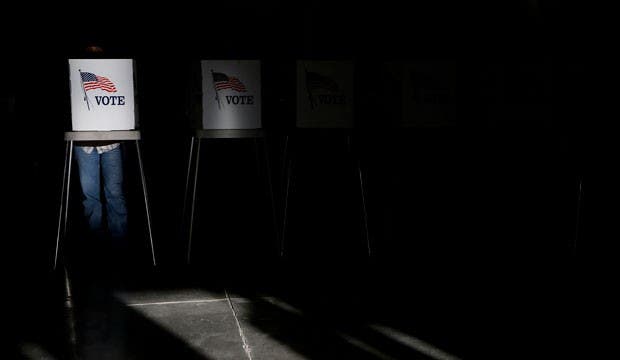 Ted Cruz: Let’s Shred The Constitution And Target American Muslims Based On Religion

Poll workers in North Carolina are in hot water after a local man filed a complaint, alleging that he and his wife were singled out and forced to take a “literacy test” before they could vote – because they didn’t have white skin.

Rudravajhala “Rudy” Ravindra and his wife were treated with rudeness and contempt by smug poll workers – and felt too scared of police retaliation to stand up for himself:

Although I go by Rudy, my legal name is Rudravajhala. In order to save time, I requested HW look at my ID. He barked, “You gotta spell it!” So I took a deep breath and began. “R-U-D-” He repeated after me and typed each letter. When he typed a B instead of a D, I had to correct him, “It’s not B; it’s D for dog.”

This farce went on a for a while, and each time he made a mistake, I patiently corrected. Meanwhile, voters in adjacent lines came and went briskly. I heaved a sigh of relief when HW finally entered my mouthful of a name into his computer and peered at the monitor. And then I had to pronounce it, and when he tried, he couldn’t get it right. He asked, “Your address?”

With a tight smile, I gave it. Already my blood pressure was quite high, and I knew if this charade continued, I might be tempted to walk out without voting. But luckily the ordeal came to an end, and with a smirk HW declared that I am the perfect voter. I almost told him that he is the perfect so and so. But I bit my tongue, as I was concerned that in these trigger happy days, HW might summon the police to haul me off.

Since my wife was out of town last week, I drove her to the designated polling place (not the same place I voted) on Election Day. This time poll worker NX subjected my wife to a similar ritual. Keeping her ID face down, he asked her to spell her name and pronounce it.

My wife and I couldn’t help but feel that we were singled out. The poll workers could have simply looked at our IDs and saved a lot of time. That in a sea of white faces at both polling stations my wife and I were the only brown-skinned individuals also led us to suspect that we were victims of racial prejudice. In these days of Trumpism and shameless xenophobia and other assorted phobias, we can’t be blamed if we are paranoid.”

The election commissioner confirmed that you do not require to have your name spelled in order to vote.
It just goes to show just how Donald Trump and his racist campaign are eroding away the foundations of our democracy. The repression of the vote is the key to a Republican victory, and it appears that Trump-supporting poll workers are discouraging actively minorities from voting by making it harder for them to vote – and making sure that they know their vote isn’t welcome in Trump’s America.
To add insult to injury, they were so fearful of the police that they couldn’t tell them what was wrong. Isolation and alienation are how racists exclude minorities from our democracy – and that is an attack on the values our nation that we cannot tolerate or condone.
Tags
racism style