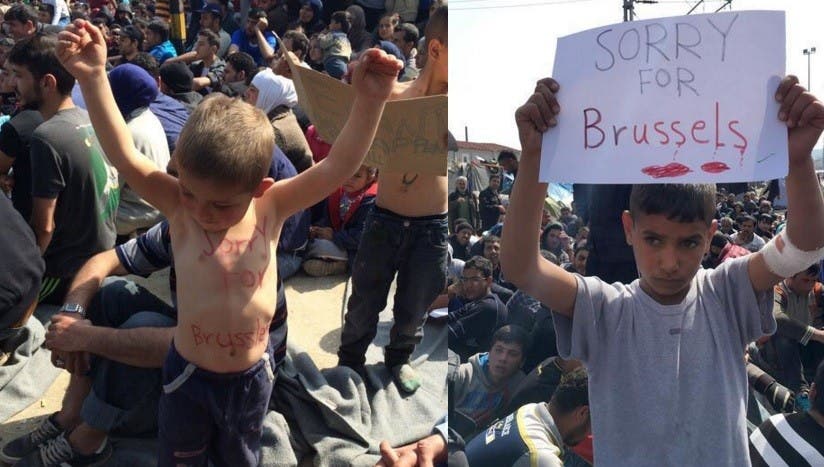 In the wake of this morning’s deadly bombings in the Belgian capital of Brussels, Muslims around the world are showing solidarity with the victims of the attacks and once again are rejecting the horrifying violence and perverted ideology of Daesh (ISIS/ISIL). These pictures of Syrian refugees standing against terror illustrates just why it is so imperative for us to make the right decisions and not punish the innocent men, women, and children who risked their lives to flee this same kind of violence at home.

Listening to right-wingers like Donald Trump or France’s Marine La Pen, you’d think that the refugees were complicit in some kind of grand conspiracy to destabilize Europe. People don’t pick up and leave their homes to travel hundreds of miles on a whim. They don’t brave leaky boats and roiling waters, trudging for miles through the harsh desert only to be placed in a concentration camp while the EU bickers over how to “deal” with you for kicks. They do it because the cataclysmic violence of the Middle East has driven them away in fear of their lives. They leave because of terrorists like Daesh; because the air forces of Bashar al-Assad, Saudi Arabia, and Russia specifically target civilians and drive them away from their homes by bombing markets, hospitals, schools, bakeries.

a child refugee in Greece sends a message to #Brussels – “Sorry for Brussels” written on his chest. via @fjavilopezpic.twitter.com/sxB4xrBkPs

The mainstream media won’t pick up on this, but one of the victims of the Brussels attacks, Bashar Sabbagh, was in fact a Syrian refugee himself. He fled unspeakable violence and endless conflict in his home nation only to have it finally kill him where he thought he was safe.

Blaming the refugees for these kinds of bombings is exactly what the jihadis want us to do. By demonizing all Muslims, we just prove that Daesh was right – that Western civilization doesn’t want or care for Muslims on the basis of their religion alone, and make it easier for Daesh to attract new followers and find those willing to carry out their deadly goals. Considering that the root of the refugee crisis lies with the interventionism of the West and the meddling of colonialists, it is more important than ever that we accept that part of the guilt lies with us, and that we need to drastically rethink our approach to international relations in response – by fostering more understanding and acceptance instead of absurd calls for more war and horrific atrocities like waterboarding.

Watch an interview with Syrian refugees here, courtesy of the New York Times: