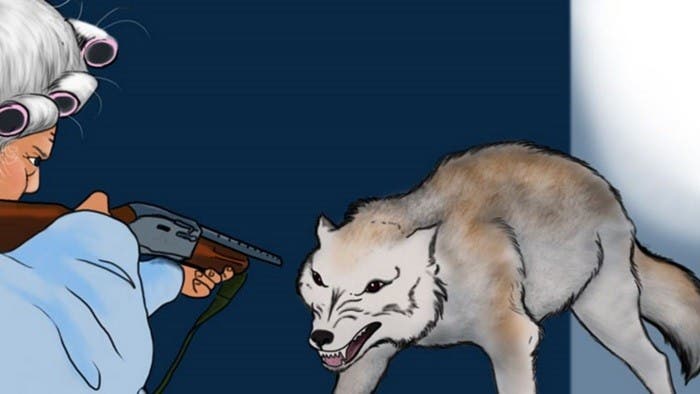 Elizabeth Warren: “I’m Still Cheering” For Bernie, “He Fights From The Heart!”

The National Rifle Association’s relentless efforts to propagate pro-gun culture has led to took a turn for the bizarre with the publication of classic fairy tales rewritten with a pro-gun angle. The “NRA Family” website has recruited conservative children’s propagandist Amelia Hamilton (author of the Growing Patriots series)  to reimagine classic Grimms Brothers stories with insidious pro-carry, “stand your ground” and hunting themes. So far, she has completed “Little Red Riding Hood (Has A Gun)” and “Hansel and Gretel (Have Guns)” and apparently a “Three Little Pigs (With Guns)” is in the works.

The didactic stories are a manifesto of NRA talking points whitewashed and dressed up in the trappings of morality tales that are chilling to read. “He realized that Grandmother hadn’t been backing away from him; she had been moving towards her shotgun to protect herself and her home” reads one line. The little violence in the stories is implied or else involves hunting (“he was able to bring the buck down instantly with a single shot”); the grisly ends of the Big Bad Wolf and the Witch are not addressed.

The editor’s note from NRA Family described the tales as such:

Most of us probably grew up having fairy tales read to us as we drifted off to sleep. But how many times have you thought back and realized just how, well, grim some of them are? Did any of them ever make your rest a little bit uneasy? Have you ever wondered what those same fairy tales might sound like if the hapless Red Riding Hoods, Hansels and Gretels had been taught about gun safety and how to use firearms? 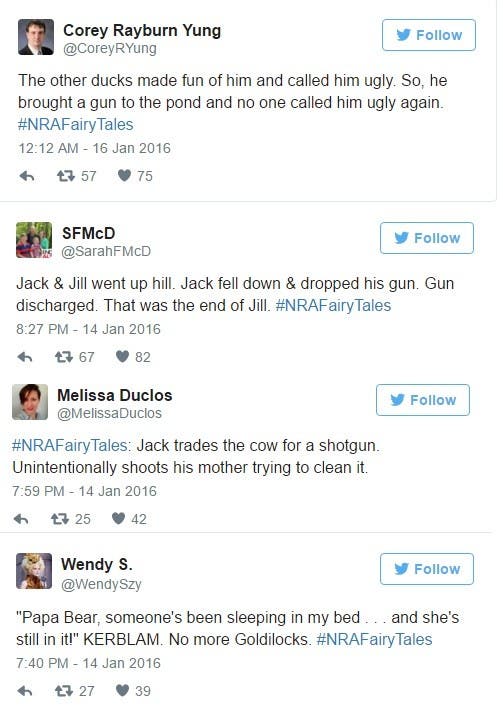 One hundred and twenty one American children have died or been injured by gunshot so far this year alone. These blatant attempts to indoctrinate children and turn deadly weapons into pedestrian objects is a threat to both American children and their parents; the countless number of children shooting themselves or others with unattended weapons clearly proves that the American people are far too irresponsible to be trusted with firearms. Gun culture in America leads to thousands of unnecessary deaths every year, and unless we pass comprehensive gun reform legislation, we will continue to be the biggest threat to our own health and safety.