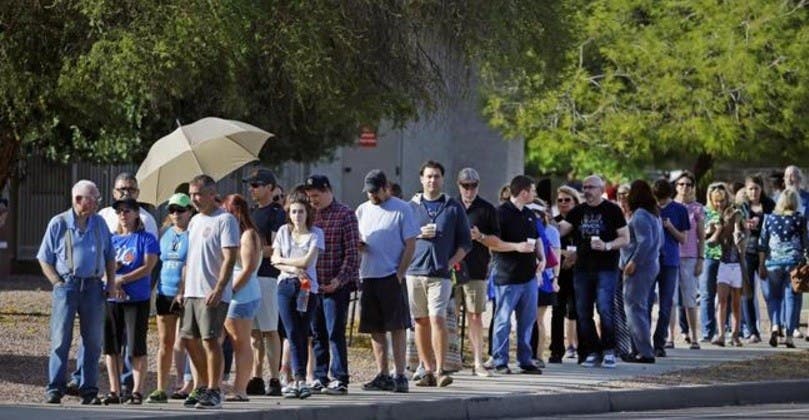 Hey Republicans, Guess How Many Of The Brussels Attackers Were Refugees

The recent Democratic primary in Arizona (a victory for Hillary Clinton) was beset with problems. Voters were forced to wait hours in line to cast their ballots – which the AP didn’t even bother to let them cast before they called the state for Clinton – an unusually low number of polling places, reports of fake bomb threats causing massive delays, and election software which conveniently changed voter registrations from Democrat to “independent.”

Arizona Representative Ruben Gallego (D-7th District) was unequivocal when asked by FOX News Latino about what had happened: “Let’s be clear – voter suppression happened.” Judging from the horror stories told by voters, it’s hard to see the situation as anything else. Republican budget cuts meant that there weren’t enough polling places to go around, forcing people to wait in mile-long lines – and some never even got to cast their ballots at all. Phoenix reporter Joe Dana noted that the 2012 primary had 300,000 voters and 200 polling places – but the 2016 primary has estimated 800,000 voters at 60 polling places. A petition asking the White House to look into the issue has already reached 200,000 signatures, and with luck measures will be taken to prevent this kind of thing in the future.

America’s elections once were the pride of the free world. Other nations looked up to us, sought to emulate us, celebrated us for the honest expression of the people’s will. These kind of shenanigans are absolutely unacceptable and are a disgrace to our long history of free and fair elections. Across the country, Republican legislators are passing discriminatory voter ID laws that target the young, the old, and minorities, preventing them from fulfilling their constitutional right on the basis of red tape. The closure of voting precincts across Arizona are further evidence that the Republican Party is working to disassemble our democracy and allow their wealthy masters to rule over us as oligarchs.

Colin Taylor
Opinion columnist and former editor-in-chief of Occupy Democrats. He graduated from Bennington College with a Bachelor's degree in history and political science. He now focuses on advancing the cause of social justice and equality in America.
Latest Posts
Tags
arizona style voter suppression