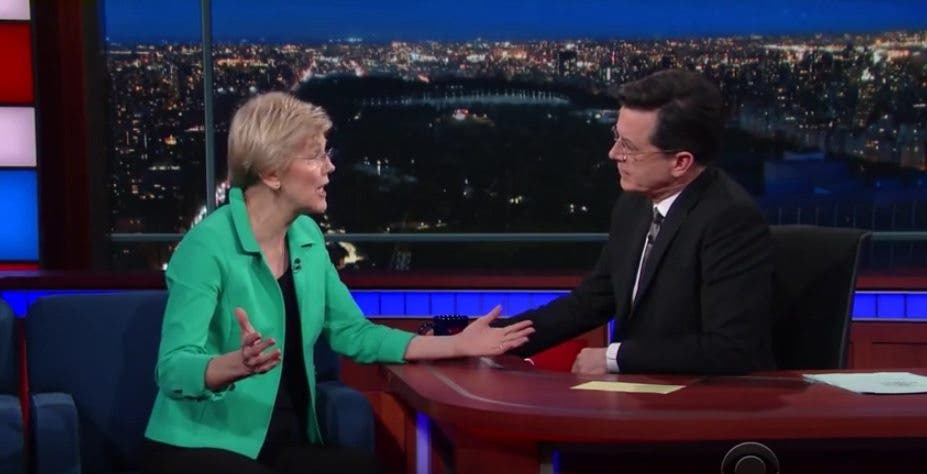 BREAKING: Mass Shooting In Virginia, Up To 6 Shot Including 2 Cops

In this clip, middle-class crusader Senator Elizabeth Warren (D-MASS) joins Stephen Colbert on the Late Show to brutally dissect the abrasive Republican front-runner for his predatory exploitation of the American people and debunks the myth that he is somehow a good businessman.

“Let’s be real clear,” she noted. “Donald Trump is looking out for exactly one guy. And that guy’s name is Donald Trump.”“When the economy is in this kind of trouble, calling on Donald Trump for help is like if your house is on fire, calling on an arsonist to come help out. He is not a business success, he is a business loser. The truth is, he inherited a fortune from his father, he kept it going by cheating and defrauding people, and then he takes his creditors through Chapter 11. He started out rich and cheated his way to getting richer” she said, then going on to insinuate that Trump has broken the law but just hasn’t “been caught.”

Trump has been selling the American people the fiction that he is a “dealmaker” that can “fix” the economy, which is actually doing just fine. MarketWatch estimates that Trump has left some $13 billion on the table in his business dealings, underperfoming throughout his 40 years of “dealmaking.”

He’s filed for bankruptcy four times and grossly overestimates his personal wealth at every turn. His tax plan would skyrocket our national debt to $34 trillion dollars. There’s nothing encouraging about any of that, and when taken in combination with his racism, narcissism, and ignorance, it’s clear he is the most unqualified man to run for President in the history of our nation.