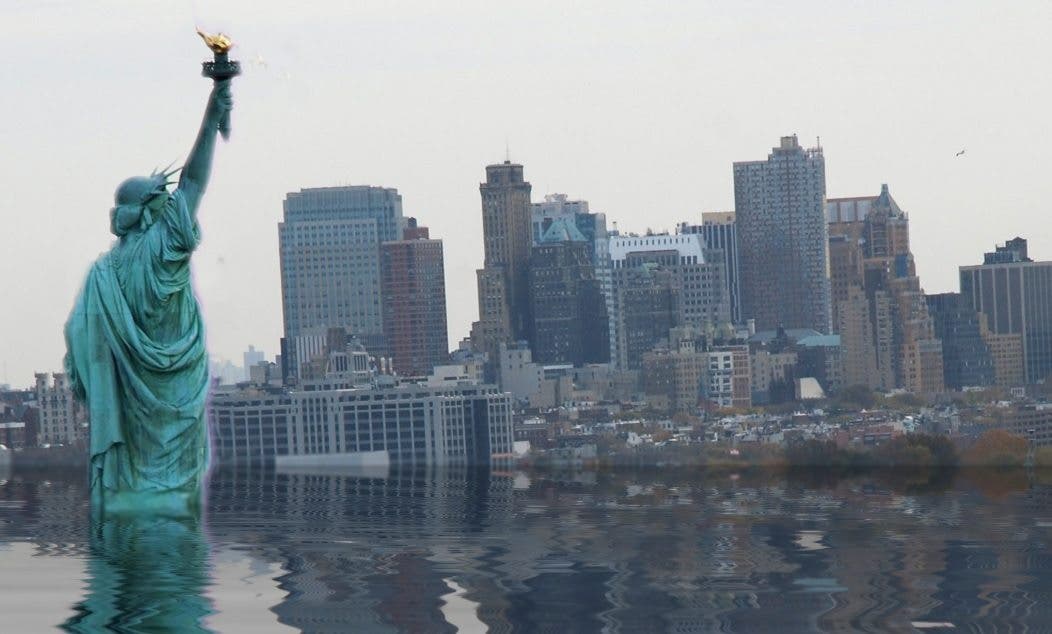 BOMBSHELL: Trump Admits He Urged His Mistress To Have An Abortion In Unearthed Audio

A new study published Wednesday confirmed what climate scientists have been warning of for years: without extremely aggressive measures to combat greenhouse gas emissions humanity will be facing catastrophic sea level rise and the inundation of coastal cities worldwide by the end of the century. Indeed the new research points to a rise in global sea levels of as much as six feet by the end of the century, which is more than twice the worst-case scenario predicted by the Intergovernmental Panel on Climate Change (IPCC) as recently as 2013.

The study, published in the journal Nature, focused specifically on the West Antarctic Ice Sheet, a vast frozen area larger than Mexico that has the potential to raise global sea levels by as much as 15 feet were it to fully disintegrate. Scientists had long warned that the West Antarctic sheet was particularly vulnerable to global warming, given that it sits on bedrock that is below sea level and would therefore be eroded from below as well as above by warming oceans. However, they had assumed that a catastrophic disintegration of the ice sheet would occur over hundreds or thousands of years.

The new research suggests that such a scenario could play out within decades, with melting from West Antarctica alone contributing to about three feet of sea level rise by 2100. Combined with melting from East Antarctica and Greenland, the study estimates that the global sea level could very well rise by five to six feet by the end of this century. Beyond that, things only get worse; the model used by the researchers predicted a near-total disintegration of Antarctica’s ice sheets by the year 2500, which would result in an astounding 49 feet of sea level rise.

Alarmingly, the dissolution of the West Antarctic sheet, which some believe may be irreversible, has already begun, as was spectacularly demonstrated in 2002 when the Larsen B Ice Shelf, which was the size of Rhode Island, broke apart in two weeks. The researchers’ model predicts that a similar fragmentation of the entire West Antarctic sheet would begin by the 2050s and play out over the decades that follow, with dramatic consequences for the world’s coastal cities.

While the new study is not the first to predict such catastrophic sea level rise by the end of the century, its methodology means that it is likely more accurate than many studies that came before it. Taking into account for the first time the effects of both melting from below the ice sheet and the caving in of massive “ice cliffs” caused by rapid disintegration, the model used in the Nature study is the first to successfully reproduce higher sea levels caused by melting in the distant past, considered a crucial test of the merits of any geologic model.

The recent study is only the latest to demonstrate that the findings of the IPCC’s 2013 report, which predicted sea level rise of no more than three feet by century’s end, are obsolete. Study after study in the past few years has predicted far greater levels of sea level rise, and even the latest report doesn’t represent the worst-case scenario. A study published last year by the European Geosciences Union posits that more than ten feet of sea-level rise is possible by the end of the century.

In the midst of its devastating predictions, the Nature study also offers some good news: it doesn’t see the disaster scenario as inevitable. The model used in the study predicted that, if the rise in global temperatures was limited to 2℃ (about 3.6℉), the Antarctic ice sheets, both East and West, would stand a good chance of remaining more-or-less intact, which would significantly mitigate sea-level rise. This finding contrasts with many recent studies that have determined the break-up of West Antarctica to be inexorable, with only the time-frame in question at this point. In any case, at current levels of greenhouse gas emissions the planet is likely to warm by far more – around 4℃, or 7.2℉ – by 2100 alone.

Limiting global temperature rise to 2℃ would be easily achievable with robust action to limit emissions and decarbonise the global energy system. And, moreover, contrary to many reports, it would be extremely cheap, representing a total cost of about 1% of global GDP annually and a net savings in energy cost of some $830 trillion, not to mention preventing catastrophic destruction and hundreds of millions of lives lost and upended. While last year’s Paris Climate Conference set limiting temperature rise to 2℃ as its goal, the measures it proposes to implement are widely viewed as insufficient to achieve this noble goal, with any decreases in emissions from Western nations being more than offset by continuing growth in the developing world.

What the new study makes clear, however, is that, regardless of the cost, we simply must limit global temperature rise or face a dystopian world in the near future. At the levels of sea-level rise predicted by the new series of studies, such major cities as Miami, Boston, New York, Sydney, London, and Hong Kong would be largely under water by the end of the century, to say nothing of the toll on hundreds of millions of impoverished citizens in places like Bangladesh, Myanmar and the Philippines, large parts of which will be uninhabitable in such a scenario.

Even as this disaster scenario draws nearer and nearer, and as the window to effectively prevent it closes, Republicans continue not only not to act, but to deny the overwhelming evidence staring them in the face that life as we know it on Earth is on the brink of dramatic change. Future generations will look back upon Republicans’ refusal to even acknowledge climate change – which produces such absurdities as the head of the House Science Committee “disproving” climate change with a snowball – as an unfathomable betrayal on par with Chamberlain’s cession of Czechoslovakia. For the benefit of the big oil companies that fund their campaigns, Republicans are quite literally sending humanity up the river without a paddle. And the river will be in the middle of Manhattan.