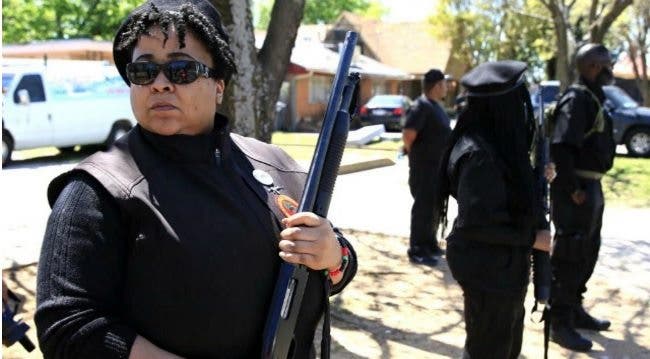 An anti-Muslim hate group got a taste of its own medicine when its members attempted to stage an armed demonstration outside a mosque in Dallas yesterday. The group, the Bureau of American Islamic Relations, or BAIR, has a habit of protesting what they call the “Islamization of America” by showing up heavily armed to Texas mosques and harassing worshippers.

On Saturday, the group planned to do the same at the Muhammad Mosque, a Nation of Islam congregation, in heavily African-American South Dallas. Instead, the overwhelmingly white protesters, who were dressed in full military gear, were met by dozens of armed counter-protesters defending their neighborhood and their place of worship.

Police reported that the tension was heavy as the two groups faced off, with counter-protesters chanting against racism, Islamophobia, and hatred. In the end the hate-mongerers of BAIR, outnumbered by the counter-protesters, dispersed quietly, marking what Yafeuh Balogun of the Huey P. Newton Gun Club called “a people’s victory.”

The Nation of Islam was joined by members of the New Black Panther Party and the Huey P. Newton Gun Club in its armed defense of the mosque. “This is an armed defense maneuver, making sure that our communities are safe and secure from any insurgents coming in,” Krystal Muhammad of the New Black Panther Party told a local news outlet last week, “We won’t allow anybody to come in and try to intimidate our brothers and sisters.”

The successful demonstration was only the latest in a long line of armed protest and self-defense by African-American groups, a tradition stretching back to the Newton’s Black Panthers. And, as was the case in Dallas yesterday, White America is typically frightened out of its wits by black men with guns, no matter how peaceful. The virulence of a resurgent right-wing hate movement in America, however, may mean more and more such confrontations, which, as we saw in Anaheim in February, are liable to turn violent.

Faced with aggressively armed racists invading their neighborhoods and politicians who support them, however, it is impossible to blame America’s oppressed for turning to peacefully armed self-defense, which serves as a jarring and successful means to draw attention to their plight.