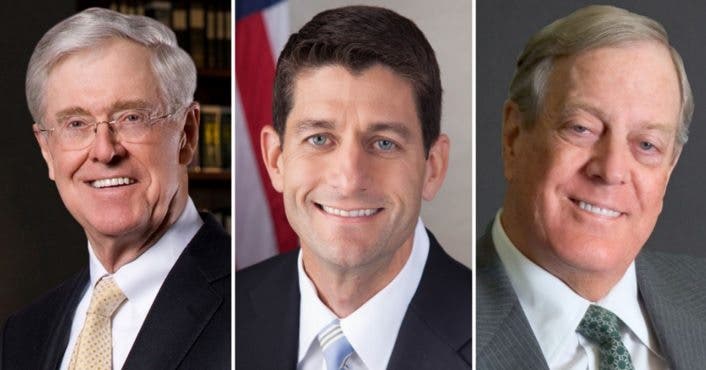 It would appear that the oligarchs that manipulate the puppet strings of the Republican Party are quite displeased with the commanding lead that abrasive rabblerouser Donald Trump has seized in the GOP’s primary. A new report surfaced today that alleged that free-market extremist Charles Koch is “quite confident” that the party establishment will be able to thwart the will of conservative voters and hand the nomination to their chosen champion, House Speaker Paul Ryan (R-WI).

Republican strategist Alex Castellanos explained how this would happen: “[I]f Mr. Trump is one hundred or more votes away from the nomination, it is unlikely he can find the delegates to get the ball in the end zone on the first ballot. He will turn the ball over on downs though nearly at the goal line. (OK, no more sports metaphors.) On the second ballot, he drops 200 or 300 votes or more and starts bleeding. Ultimately, he bleeds to death on the convention floor — which you think would be good news for the candidate in second place, Senator Ted Cruz, unless, of course, you’ve met Senator Ted Cruz. If GOP delegates start looking for an alternative to both Trump and Senator Cruz, why settle for Miss Ohio when you could marry Miss America? Why not wipe the slate clean and go for what delegates really want, the Republican Speaker?

Ryan’s links to the Kochs go back a long way. Before entering Congress, he worked for a conservative group that eventually became FreedomWorks, one of the primary vehicles that the Kochs used to funnel money to the Tea Party and manufacture a “grassroots” movement against the federal government. He received the Koch-funded Americans For Prosperity’s “Defender Of The American Dream Award” in 2008 and has received huge amounts of money from the Kochs and their network over the years.

In return, he has quietly been pushing a free-market extremist “starve the beast” budget-slashing agenda his entire time in Congress. In Paul Ryan’s own words, recipients of Social Security and welfare benefits are nothing but “takers.” His poor-shaming rhetoric is paired with austerity policies that would cripple critical government agencies and turn public services into yet another for-profit enterprise, leaving the American people at the mercy of corporate interests and funneling political power (not to mention wealth) to the top 1% of Americans.

At this point in a deeply polarized political race, the mainstream media is trying to paint Paul Ryan as a “moderate” because he’s not a religious extremist like Ted Cruz or an open racist like Donald Trump. But let’s not forget that Ryan was the instigator of the “debt ceiling crisis,” in which he demanded that the American people suffer cuts to Social Security, Medicare, education while giving away billions in tax cuts to multinational corporations and handouts to the wealthy.

The Kochs are turned off by the obnoxiously smug self-righteousness of Ted Cruz and are threatened by Donald Trump, who they see as am uncontrollable wildcard. So they have turned back to their little puppet, Paul Ryan, to lead their crusade against the American government and liberalism once again – even though he was resoundingly rejected by the American people when he ran as Mitt Romney’s vice-president in 2012.

It’s been proven time and time again that the Republican Party has entirely given up even pretending to care about the voters that put them into power in the first place. Beholden to corporate interests and the whims of the oligarchs, establishment Republicans are ready to ignore the voice of their voters and openly throw the integrity of our democracy in the trash in order to please their overlords. A true reveal magnifico.