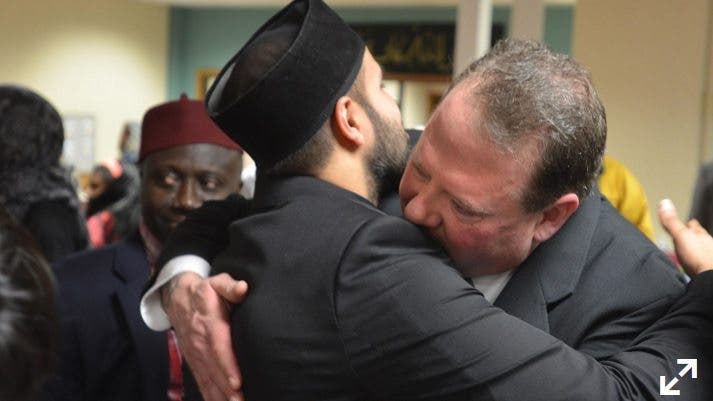 Former Marine Ted. A Hakey Jr. used to be scared of Muslims. So much so that last November, he had one too many drinks and began blindly firing shots from a high-powered Springfield Armory M1A rifle into the walls of the neighboring Bait ul Aman “House of Peace” Mosque, for which he was arrested and promptly plead guilty. He faces 8 to 14 months in prison for committing a hate crime, due to be sentenced in May.

But in a heartwarming moment of redemption, he later returned to the mosque to apologize for the violence he committed and to beg forgiveness: “I was drinking that night more than I probably should have been” he admitted to the congregation of Connecticut Ahmadiyya Muslims. “As a neighbor, I did have fears, but fear is always when you don’t know something. The unknown is what you are always afraid of. I wish I had come knocked on your door, and if I spent five minutes with you, it would have made all the difference in the world. And I didn’t do that. Going forward. I want to help you bridge that gap and help someone else not make the same mistake I did. … Everything happens for a reason and I believe some good will come out of this.”

Mr. Hakey bravely accepted all responsibility for his actions, ashamed at disgracing his nation and the values of the Marine Corps, to whom he also apologized.  “It went against everything I stand for. After this happened, I begged the FBI to let me come over and apologize. I read in the papers where [mosque members] weren’t going to be afraid and keep worshipping. I feel God is very proud of your whole congregation for that. You all stood up and you came. I just ask for your forgiveness.”

The worshipers at the mosque, whose motto is “love for all, hatred for none,” graciously accepted his apology and forgave Mr. Hakey Jr. Take note, America – this is what true Islam looks like.

True Islam is mercy. True Islam is forgiving a man who tried to kill you and embracing him. Mosque director Dr. Mohammed Qureshi said that “We all had tears, and words cannot express that. We will be better neighbors and what was said that day made a huge difference to us. We greeted and we hugged just like a Muslim neighbor. We know why he did what he did — because he never heard our message. We now see it in his heart and we see it in his eyes.”

It’s a beautiful show of cooperation and reconciliation that is a rare sight in this time of contempt and fear. Islamophobic and racially motivated hate crimes are on the rise across the United States as conservatives like Donald Trump and Ted Cruz relentlessly work to terrorize the American people, turning us against each other with cheap identity politics and hyperbolic threats of terrorism. But it’s always the hatred, the violence, and the pain that makes the front page of the news – the stories of love and forgiveness, of the mercy of Islam, of the celebrations of the triumph of human goodness, of sin and redemption, somehow never make the cut.