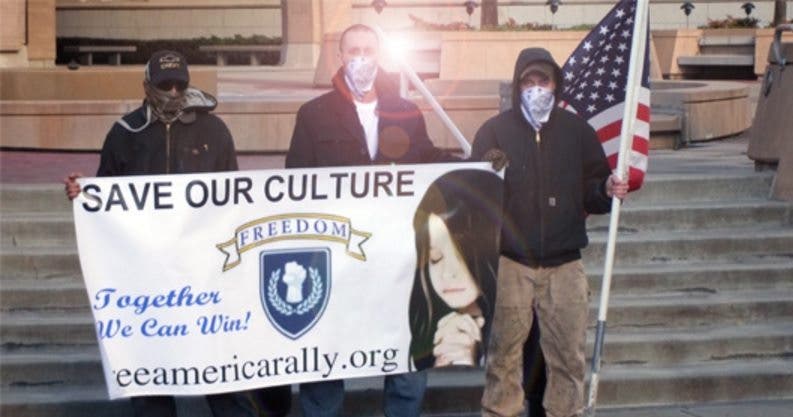 McConnell: We Won’t Confirm Scalia Replacement EVEN IF Dems Keep The White House

In another bizarre twist for the campaign of Donald Trump, the reality-TV star turned presidential candidate, the Huffington Post learned that the directors of the white nationalist American Freedom Party (AFP) have decided to “tone down” the rhetoric in order to get Trump elected. Emails obtained by the Huffington Post show the AFP’s directors working to “moderate” their message to obtain broader appeal.

One of the directors, Tom Sunic, who has spoken at meetings sponsored by the Ku Klux Klan, Holocaust-deniers, and neo-Nazis, said “Let’s be a wee more diplomatic with the ms [mainstream] media…Instead of using the right word ‘white genocide’ let’s use ‘physical, administrative removal of Americans of European extraction.’ Instead of ‘white nationalists’ let’s use ‘white advocates’ or ‘advocates of European heritage.’ ”

Jared Taylor, editor of the pseudo-academic journal, American Renaissance said: “I agree that ‘genocide’ is too strong…It sounds like people attacking us with machetes and pitchforks. I think simple ‘dispossession’ is better. Also white nationalism sounds pretty stern, I think white advocacy sounds less scary but says what we want to say.”

Kevin MacDonald, another AFP director, wrote: “If you say genocide, people roll their eyes…It’s not a good label to use in a sound bite.” An AFP backed PAC has sent pro-Trump robocalls to voters in Iowa and New Hampshire. The group placing the calls is robocalls is American National Super PAC to support Trump, funded by William Daniel Johnson, a Los Angeles attorney and chairman of AFP, who is responsible for creating the toned-down message. The call “voiced by a sincere grandmother” identified as a member of the AFP says: “I am voting for Donald Trump because he will not only be presidential, he will put America first. Furthermore, he will respect all women and will help preserve Western civilization. If you vote for Donald Trump, he will be a fine president. He will select the very best persons to be in his cabinet. And the entire world will benefit from his leadership.”

Johnson claims to have personally answered hundreds of replies to the robocalls, which “were surprisingly favorable to Donald Trump. So yes, there is merit in toning down a white nationalist message to reach Trump supporters.”  Trump has disavowed Johnson and his group, but it should surprise no one that according to the Southern Poverty Law Center, the AFP was “initially established by racist Southern California skinheads and aims to deport immigrants and return the United States to white rule” – beliefs consistent with Trump’s rampant xenophobic stump rhetoric.

Johnson has a vision for America, as a “white ethno state,” which he hopes will be achieved in his lifetime – which is consistent with the message coming from the Trump campaign and as Johnson says “I think a Trump candidacy is helping move us in that direction.” However, not all AFP members share the belief in ‘toning it down’. In fact, lifelong segregationist Bob Whitaker, presidential candidate for the party, resigned because his party is “toning down its white genocide message to attract Trump supporters.” A senior staff member emailed The Huffington Post Friday writing: “I’ve been in campaigns for fifty years, and I’ve never seen anything as screwed up as this…the party’s continued focus on Trump’s campaign is impossible for Whitaker to work with.”

The question is: Does Trump want to tone it down? As we mentioned, Trump has denounced the AFP’s support, noting that the group is not affiliated with his campaign. But his dissociation from white supremacists has been consistently fumbled. You may recall that after David Duke, Grand Wizard of the KKK, endorsed his candidacy, Trump said during an interview with CNN, he knows nothing about Duke and nothing about white supremacists. Taking a great deal of heat about those comments Trump ultimately disavowed Duke, but he blamed his initial answer on a “bad earpiece,” asserting that he did not hear the question. Trump has received campaign donations from white nationalists–only to return them after their existence was publicized. Trump even retweeted a user with the handle “WhiteGenocideTM” to his millions of Twitter followers, leaving Whitaker to believe Trump “will one day endorse the concept of White Genocide.”

Trump is likely to be the Republican nominee for president. A man who incites violence at his rallies, is a serial liar (Politifact reports only 7% what he says is true), a racist, and a misogynist. Trump is also a rampant xenophobe, who has threatened to deport 11 million immigrants and ban all Muslims from this country. Donald Trump is a fascist authoritarian, and whether or not he publicly denounces white supremacist groups, his actions show he is aligned with their ideas and clearly the groups also believe that to be the case. Is this really the man we want representing the American people and American values throughout the world?