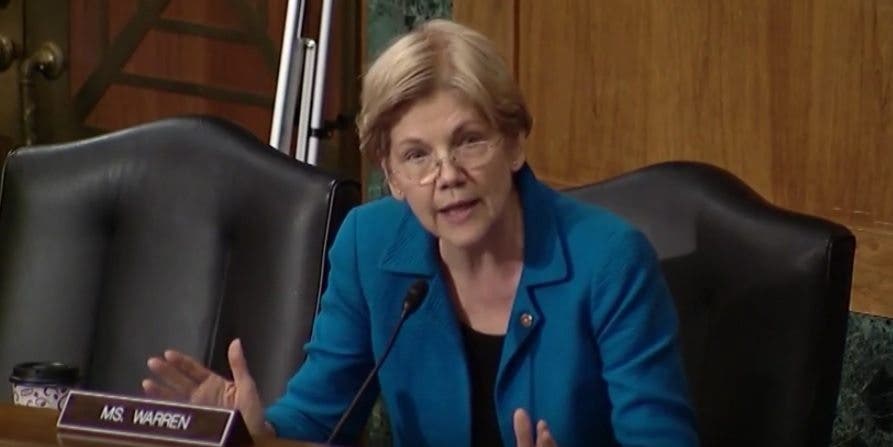 Senator Elizabeth Warren (D-MASS) is famous for her fiery condemnations and stalwart defense of the American consumer. Her career in the Senate has been defined by her aggressive pursuit of justice for the American people and to punish Wall Street and predatory corporations for tanking our economy and systematically extorting us for decades. Undaunted, the giant financial institutions continued to try to roll back the landmark legislation that she helped push through, the Dodd-Frank Act, which prevents them from playing the same casino capitalism that sent us into the Great Recession in the first place.

On Tuesday, the Banking Committee convened to hear a deluge of crocodile tears from finance lobbyists, who complain endlessly that that not exploiting their customers is “too costly” for the banks. They made the mistake of having Leonard Chanin to offer deposition. Chanin was formerly the Deputy Director of the Division of Consumer and Community Affairs at the Federal Reserve Board and later was given the same position at the Consumer Financial Protection Bureau by Warren herself.

Chanin quickly left the Consumer Financial Protection Bureau to go back through the revolving doors to work for the very institutions he was supposedly “regulating.” Senator Warren did not hold back:

Mr. Chanin, as Sen. Brown mentioned from 2005 to 2011 you held top positions in the Federal Reserve’s division of consumer and community affairs, and in those positions you had both the legal authority and the legal responsibility to regulate deceptive mortgages, including dangerous subprime lending that sparked the 2008 financial crisis. But you didn’t do it, despite years of calls and even begging from consumer advocates and others asking you to act. Instead, you did essentially nothing.

Now, your failure had devastating consequences. […] According to the Dallas Fed, that crisis cost the American economy an estimated $14 trillion. It cost millions of families their homes, their jobs, their savings. It devastated communities across America.

So when you talk now about how certain regulations are too costly or too difficult to comply with, you sound a lot like you did before the 2008 crisis when you failed to act. So my question is, given your track record at the Fed, why should anyone take you seriously now.

It’s clear who really has her priorities straight. Honest and dedicated politicians like Elizabeth Warren and her good friend Senator Bernie Sanders form the front line of the American people’s defense against the machinations of greedy oligarchs.