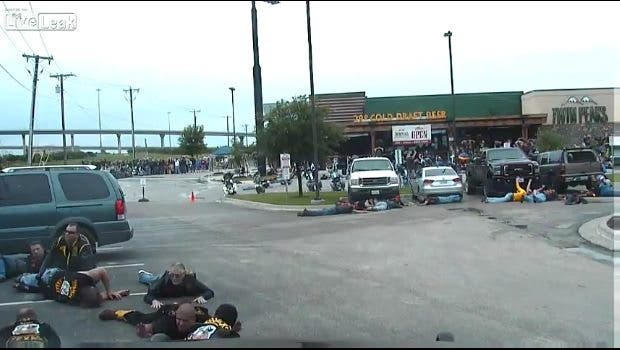 New police dashcam footage of the May 2015 biker shootout in Waco, Texas, has emerged, illustrating the dangers of a heavily armed civilian populace. Nearly two hundred bikers from different “motorcycle clubs” gathered to discuss the “political rights” of bikers. But, in a shocking turn of events that nobody could have predicted, a gathering hundreds of armed criminals in the same place erupted in violence. Nine bikers were killed in the ensuing shootout, eighteen were injured, and 177 were arrested by federal authorities.

Police believe the incident was provoked by long-standing disputes over enormously petty slights and insults. They’re the sort of people who get into brawls at a “Toys for Tots” event in Decatur, Texas and are enormously offended by another group wearing the “Texas bottom rocker” on their vests, whatever that might mean. The kind of people with long ties to criminal organization who should absolutely not be allowed to own weapons – but who live in a state with some of the loosest gun laws in the nation.

The results speak for themselves.

Here’s a timeline of the video.

Add your name to call on prosecutors to ARREST DONALD TRUMP for his crimes!Advertisements
Tags
bikers shooting style waco texas