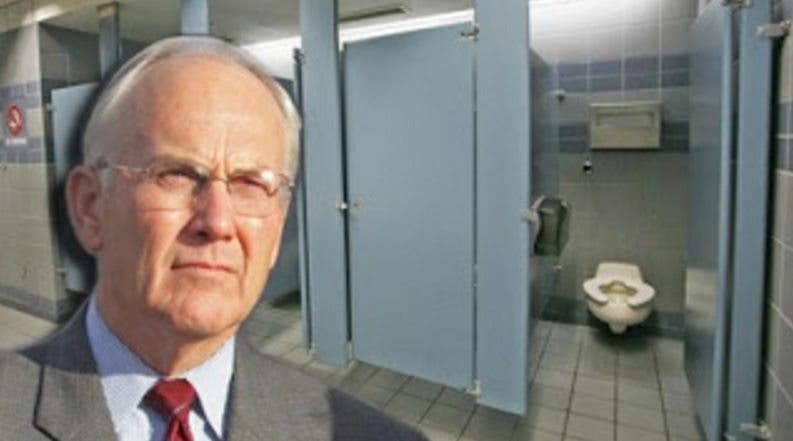 North Carolina has been drawing increased scrutiny for a new discriminatory law passed by the state’s Republican Congress that severely limits the rights of the LGBT community, especially after major corporations, entertainers, and politicians have called for boycotting the state. The Republican uproar began last month when the city of Charlotte passed a nondiscrimination ordinance extending new rights to the city’s LGBT community. As has often been the case with local LGBT rights ordinances, the provision that aroused the most conservative anger was one allowing transgender individuals to use public restrooms based on their gender identity rather than their biological sex. Instantly ramping up their bigotry into overdrive, North Carolina Republicans have warned of an apocalypse of sexual harassment that their delusional minds have dreamed up.

Conservatism is the ideology of fear, so it is no surprise that Republicans are resorting to such sophistic fear-mongering to justify their repression. The blatant dishonesty and hypocrisy of their position is made fully clear however, by comparing the rates of sexual assault by transgender people and Republican congressmen. While “family values” Republicans have a long history of adultery and sexual abuse there have been three cases in recent history of Republican Congressmen sexually harassing people in bathrooms alone. There are zero recorded instances of harassment by transgender people in bathrooms. John Hinson, former Mississippi Congressman, was arrested for receiving oral sex from a staffer in the House of Representatives’ bathroom in 1981. Larry Craig, senator from Idaho, was found soliciting sex from an undercover cop in an airport bathroom in 2007, as was Florida state representative Bob Allen in the same year.

Republicans’ response to the Charlotte ordinance began last month when they called a special session of the state legislature and passed an incredibly restrictive new law known as HB2. Beyond simply overturning Charlotte’s ordinance, the new law explicitly bans transgender individuals from using public restrooms of the gender they identify with, making North Carolina the first state to enact such an official restriction.

The new law goes on to ban all North Carolina municipalities from passing ordinances protecting the rights of the LGBT community, whether in bathrooms, public accommodations, or the workplace. With this restriction all municipalities, including the numerous North Carolina cities that have passed more progressive laws, will revert to the extremely regressive state law that grants little to no protections to people on the basis of sexual or gender identity.

Because randomly shouting “religious liberty” doesn’t seem to work as well in this case, North Carolina Republicans had to come up with a new justification for the LGBT discrimination the law represents. The one they have chosen, of course, is that this vast rollback of rights is necessary to protect women from becoming victims of sexual assault in public restrooms supposedly opened up to sexual predators by Charlotte and other cities’ ‘bathroom bills.’ To hear Republicans, including national figures, defend their discriminatory law you would think they are the only thing standing between civilization and a mass sexual free-for-all.

In reality – which is not a place that most Republicans inhabit – allowing transgender individuals to use the bathroom of their choice has absolutely no impact on rates of sexual harassment or assault in public restrooms. Indeed to implicitly associate the transgender community with sexual assault is particularly shameless given the astonishing rates of sexual violence that transgender people face.

So, just as Republicans wallow in their Islamophobic fear and use Islamic terrorism to justify hate and repression despite the fact that an American is four times more likely to die at the hands of a right-wing terrorist than an Islamic one, transgender people have become the new scapegoats justifying wholesale repression of the LGBT community in spite of the facts. If Republicans are really so concerned about preventing sexual abuse in public bathrooms they’d be better off banning themselves from making use of them.

Add your name to call on prosecutors to ARREST DONALD TRUMP for his crimes!Advertisements
Tags
republicans style trans