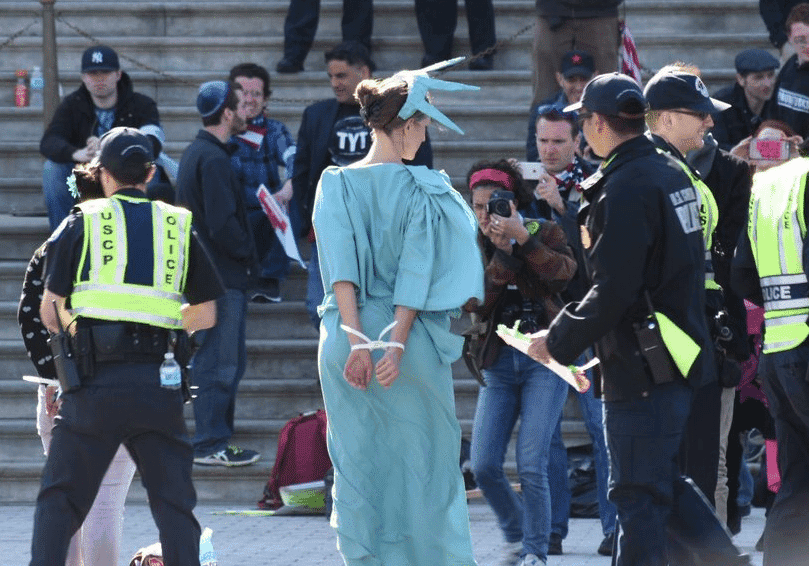 Thousands of demonstrators gathered outside Congress in Washington yesterday to demand an end to voter suppression and big money in politics. As the protesters set up a sit-in on the steps of the Capitol. Chanting “Overturn Citizens United” all the while, US Capitol Police swooped in and arrested one protester after another. When all was said and done more than four hundred people had been arrested, making the demonstration one of the largest single acts of civil disobedience in Washington’s history.

The demonstrations marked the opening day of a new grassroots movement known as Democracy Spring, which has the stated goals of “ending the corruption of big money in our politics” and “ensuring free and fair elections.” The movement has demonstrations planned in Washington throughout the coming weeks, focusing on issues such as labor rights, environmental issues, and racial justice, all of which are tied together in organizers’ minds by the monetization of elections and voter suppression that have become dangerous trends in our democracy in recent years.

Perhaps seeking to preempt the charges of aimlessness that willfully ignorant commentators have thrown at other grassroots movements like Occupy Wall Street, the Democracy Spring protesters have identified several concrete steps that members of Congress can take to restore the purity our democracy: overturn Citizens United, implement public funding of elections, restore the Voting Rights Act, repeal voter suppression laws, and expand citizens’ access to the polls.

Despite – or perhaps because of – the movement’s demands and the striking scene of hundreds of demonstrators arrested on the Capitol steps, the protests received extremely minimal coverage in much of the mainstream media. This is perhaps unsurprising given that most major media companies participate in the monetary corruption of politics by funneling vast sums of money to their favored candidates. The demonstrations also prompted only a minimal reaction from Congress members and politicians, although presidential candidates Bernie Sanders (D) and Jill Stein (Green) did announce their support of the movement.

Despite the challenges, protest organizers remain committed to their goal and will continue to gather in the coming weeks, their very demonstrations exemplifying the democratic principles that they seek to defend and restore. In the words of Kai Newkirk, one of the lead organizers of the movement, “It was a beautiful, powerful moment to see hundreds and hundreds of people come together from across the country who were willing to sit in and to be arrested to stand up and demand an equal voice for all in our government, and a democracy where all of us matter, not just the one percent. It was a great start, it was a spark, and now we’re trying to build on it.”

James DeVinne
James DeVinne is a student at American University in Washington, DC majoring in International Service with a focus on the Middle East and South Asia. He is a founding member of Occupy Baltimore and interns at the Tahrir Institute for Middle East Policy.
Latest Posts
Tags
democracy spring style