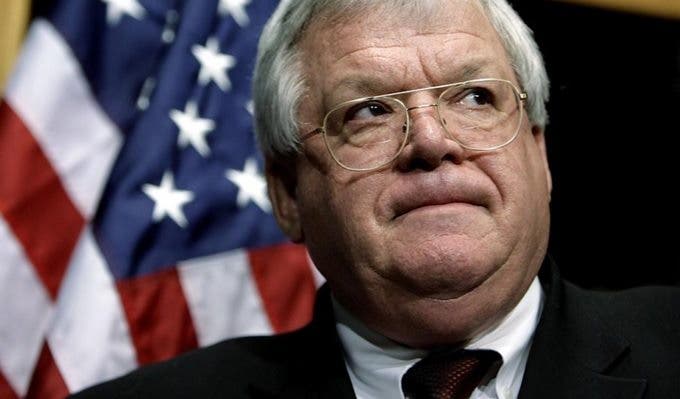 The former Republican Speaker of the House, Dennis Hastert, is currently on trial for financial misconduct in relation to the hush money he gave to teenage boys he molested while working as a gym teacher in Illinois. The statute of limitations has expired for those heinous crimes, meaning Hastert will escape justice for violating the innocence of children. He is still under indictment for financial crimes, meaning he could still see time – but his lawyers are pleading for probation.

While the molestation charges are horrifying enough on their own, the real kicker is Hastert’s long record of being a staunch defender of “family values” and styling himself as a protector of children. When Utah teen Elizabeth Smart was kidnapped and rescued in 2003, Hastert demanded that child molesters get life sentences in prison for their crimes:

“It is important to have a national notification system to help safely recover children kidnapped by child predators. But it is equally important to stop those predators before they strike, to put repeat child molesters into jail for the rest of their lives and to help law enforcement with the tools they need to get the job done.”

Now that he has been exposed as a monster and a hypocrite, he doesn’t seem to agree with that statement anymore. His lawyers demand that he be kept out of prison due to his failing health, arguing that Hastert “apologizes for his misconduct that occurred decades ago” and is “overwhelmed by the guilt.”

“Hastert’s fall from grace has been swift and devastating. He knows that, for the rest of his life, wherever he goes, the public warmth and affection that he previously received will be replaced by hostility and isolation. Mr. Hastert has been stung by the public repudiations of him that followed his indictment. He will stand before the court having deteriorated both physically and emotionally, undoubtedly in part due to public shaming and humiliation of an unprecedented degree.”

Please, cry us a river. Dennis Hastert not only violated the innocence and trust of five teenage boys but spent his whole life a liar, shaming LGBT Americans while shouldering the guilt for his own crimes, calling for harsh penalties for crimes he himself has committed, leading the impeachment of a sitting president for consensual sex acts while being guilty of his own personal atrocities. Being publicly pilloried is the very least he deserves. The rest of his life behind bars would also be quite fitting.

EDITOR’S NOTE – A previous version of this article used wording that implied an equivocation between LGBT Americans and child molesters, which was absolutely not my intention. I apologize profusely and will be more careful with my word choice in the future.

Add your name to call on prosecutors to ARREST DONALD TRUMP for his crimes!Advertisements
Tags
hastert style