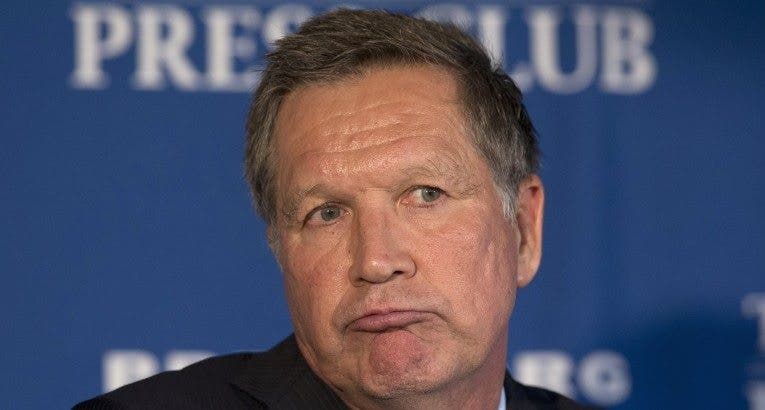 Given that the other two options on the table are Donald Trump and Ted Cruz, many reasonable people have listened to Ohio Governor John Kasich and thought, “wow, he seems relatively reasonable.” And indeed, compared to Cruz’s puritanical militaristic theocracy and Trump’s populist fascism, Kasich – who merely espouses the typical line of the Republican “establishment” – is quite sane. The fact of the matter is, however, that we have let the focus on Trump and Cruz distract us from just how bigoted and backwards the “establishment” Republican line touted by Kasich truly is. And our mistake was made abundantly clear at a Kasich town hall even in Watertown, NY today when the candidate blamed women who go to “parties with a lot of alcohol” for rape.

His comments came in response to a question from a freshman at nearby St. Lawrence University, who asked the governor, “what are you going to do in office as president to help me feel safer and more secure regarding sexual violence, harassment, and rape?” In response Kasich at first rambled about various measures like confidential reporting and rape kits that he has promoted as governor “if something happens to you along the lines of sexual harassment…or whatever,” dismissing heinous crimes with a shrug. He then got to what in his mind is the real heart of the matter, saying, “I’d also give you one bit of advice: Don’t go to parties where there’s a lot of alcohol.” The crowd went wild.

Kasich’s paternalistic, victim-blaming stance on rape is typical of the Republican viewpoint, which seeks out anything and anyone to blame for rape other than the rapist. In this warped world view, if women just didn’t do so much of this or had a little more of that, then surely they wouldn’t be raped! No mention is ever given to the need to curb the rampant patriarchal sexism and sexualization that pervade our society, or to teach boys and men to respect women. Instead, it is the women who need to be “educated” on proper behavior. No one is denying the link between alcohol and sexual assault, but what is so insidious about Kasich’s comments is that he offers no other solutions and says nothing about the perpetrators and societal conditions that engender rape, instead exclusively blaming the victims, as Republicans nearly always do.

It would make just as much if not more sense to tell young men that they shouldn’t drink alcohol so as to prevent sexual assault, yet such a proscription is never uttered. That is because, fundamentally, Republicans accept rape and sexual violence as almost an inevitable result of insatiable male sexuality, and thus see the solution as imposing restrictions on women to keep them safe from the threat. This ideology of victim-blaming is of course completely insane, but as with most issues, Republicans can neither take a step back to objectively assess what is wrong with our society nor have the vision and courage to press for radical measures to change it. Just such radical measures are needed in our society, where sexism is so pervasive that blaming violent crime on the victims barely raises an eyebrow.

If the young woman at Kasich’s rally had asked about terrorism, chances are his response wouldn’t have been “I’ll give you some advice: stay away from airports.” Instead he would have spouted off on a bigoted Islamophobic rant that doubtless at some point would have included the statement that we “won’t sacrifice our way of life to terrorists” because to do so would be to “let the terrorists win.” And yet precisely what Kasich and his ilk are doing is letting rapists, sexism, and rape culture win. By blaming victims and asking them to redefine their lives to prevent the crimes of others, they are essentially preaching that sexism and sexual violence are inevitable and we just need to adapt as best we can. And yet it is exactly such a defeatist attitude, and the justifications for rape and magnanimity towards rapists that it inevitably leads to, that allows our epidemic of sexual violence to continue.

Kasich has a long history of fighting against women’s rights, from defunding rape crisis centers to shutting abortion clinics and curtailing access to women’s contraception. Incidentally, he is also a racist, a xenophobe, a narcissist, and just generally awful. What is truly tragic about the state of America today is that such characteristic pass for normal in the Republican Party and are barely even questioned. It takes a special breed of bigot like the fascist Trump or the theocratic Cruz, who get up on stage and defend war crimes and white supremacists, to cause the public to bat an eye (and of course these two are still dominating the Republican primary). What we shouldn’t lose sight of is that the Republicans’ conservative ideology in any form means a bigoted demeaning of all who are not rich, straight white men.