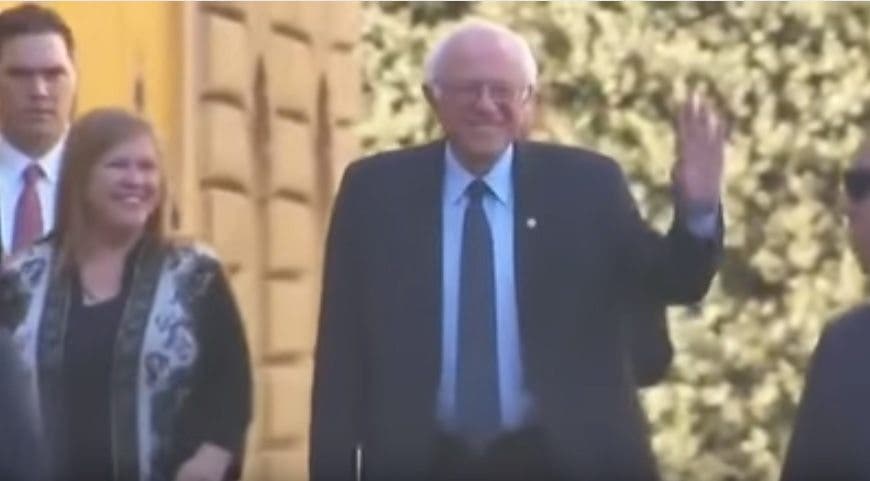 This clip shows Democratic presidential candidate Senator Bernie Sanders arriving at the Vatican, where he is attending a conference at the Pontifical Academy of Social Sciences. He is pleasantly surprised to be greeted like a returning hero – crowds of Italians turned out to happily chant “Bernie! Bernie!”  Senator Sanders obliges them with a moving speech about the pressing need for economic justice in the global economy.

“Very very wealthy people are becoming wealthier while most people are becoming poorer. In fact, the top 1% of people on this planet own more wealth than the 99% of the rest. That, to me, is unacceptable, it is unsustainable, it is immoral, and together we’ve got to change that. I have been enormously impressed by Pope Francis for speaking out on his visionary views about creating a moral economy, an economy that works for all people – not just the people on top!”

He goes on to discuss the dominance of the fossil fuel industry and the growing threat of climate change, another issue which he and the Holy Father are both very passionate about. He highlights how all the issues are interconnected and all trails lead back to the gross power and influence of the global oligarchy which controls the vast majority of the world’s wealth. It’s a very moving scene which emphasizes Sanders’ leadership and his ability to bring people together – and shows that his ideas are popular not just among Americans, but strikingly resonate among people from all over the world.