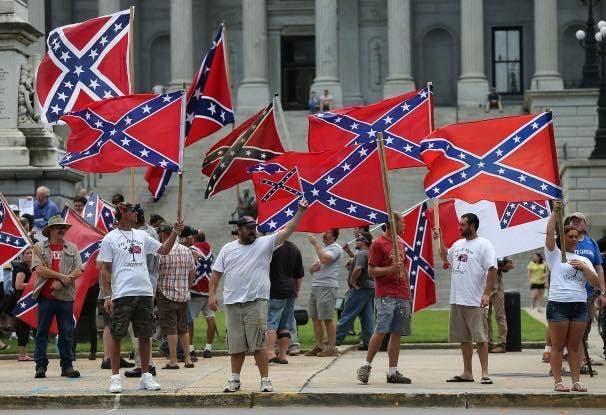 Once again, it’s party convention season, which means it’s time for wingnuts in Texas to demand their independence and secede from the union once again. According to the Texas Nationalist Movement, some twenty-two counties passed secession items at their conventions, in efforts to bring the issue to the table during the state’s Republican Party Convention in May. While the Texas GOP says they can only confirm ten counties, that’s still quite a jump from the one item the TNM was able to pass in the 2012 cycle.

The Texas Republican Party apparatus is not pleased with the development, and will do everything in their power to silence their independence-minded constituents. GOP Texas Chairman Tom Mechler complained that the TNM was “unpatriotic” and that “Republican is not even in their name,” while secessionists, channeling their Trumpish anti-establishment fury, accuse him of being “of the same mindset as the bureaucrats in Washington.”

The irony, of course, is that the Texas Republican Party would be in a very sticky situation without the federal government, which they constantly disparage while gleefully accepting millions from Washington in order to cover up the costs of their own mismangement. In 2010, the federal government spent about $9,000 per Texan, while the state spent a meager $2,200 on each of their citizens, forcing well-run liberal states to subsidize their awful Tea Party economics and refusal to adequately care for their impoverished citizens.

While the Supreme Court expressly forbid states from secession following the end of the Civil War, we should be chastising the Texas for wasting their time on nonsense like this and instead address some issues – like the fact that their state is one of the worst for children in the country. In the past year, the state of Texas worked hard to shutter every single Planned Parenthood in the state, even though one in four Texas children already live in poverty. Thirteen percent of Texas kids don’t have healthcare, because the state refused to expand Medicaid under the Affordable Care Act. 27% of Texas kids live in food-insecure households. One in three kids receive no pre-natal care, setting them up for serious health problems down the line. Thanks to their insistence on useless abstinence-only education, Texas has the fifth highest rate of teen pregnancy in the country, perpetuating the cycle of poverty indefinitely.

Get your priorities straight, Texas.