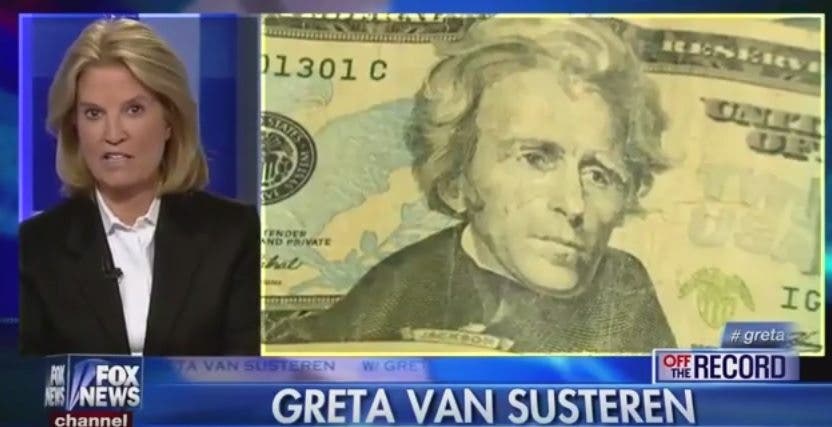 It is truly incomprehensible how conservatives will take any minor thing that the Obama administration tries to do and blame him for “dividing the country.” Certainly such an uncontroversial move as removing the face of a genocidal racist from just the front of the $20 bill and replacing him with an abolitionist and women’s rights hero, an icon of American history, should be allowed the benefit of the doubt.

But not at FOX “News,” apparently. Following on the heels of the offensive and bizarre remarks made by failed presidential candidate Ben Carson earlier today comes Greta Van Susteren, who has the nerve to call her self a feminist before accusing the President of “dividing the country” and being “stupid” by creating a “completely unnecessary fight” to put a woman on our money.

Susteren went on to say that we should “give Tubman her own bill. Like a $25 bill. We could use a $25 bill. Put her picture on that and we could all celebrate. That’s the smart and easy thing to do. But no, some people don’t think and would gratuitously stir up conflict in the nation. That is so awful, and yes, dumb.”

What is truly awful are her remarks, on every level. First of all, while he certainly approves of the choice, President Obama has better things to do than to personally decide who goes on the bill, which was part of an ongoing plan to modernize our paper money both aesthetically and physically (including new security features and tactile indicators for the blind). Treasury Secretary Jack Lew, after a great deal of consultation with the American people, made that decision.

Let’s not even go into the absurdity of simply “creating a new bill.” Susteren’s comments represent the undercurrent of naked racism and white supremacy that underly all right-wing echo chamber narratives. The removal of the portrait of a President who owned hundreds of slaves, was a big fan of slavery, forced mass deportation campaigns to ethnically cleanse our territories of Native Americans and who was by many accounts a most unsympathetic and abrasive man, should not be a controversial idea. The fact that it is to FOX should be seen as a tacit endorsement of all his crimes.

Such a move by a white President would be a five-minute talking point in a regular news cycle; it is despicable how even the most pedestrian actions of the Obama administration are turned into an excuse to demonize him.

Colin Taylor
Opinion columnist and former editor-in-chief of Occupy Democrats. He graduated from Bennington College with a Bachelor's degree in history and political science. He now focuses on advancing the cause of social justice and equality in America.
Latest Posts
Tags
fox obama style