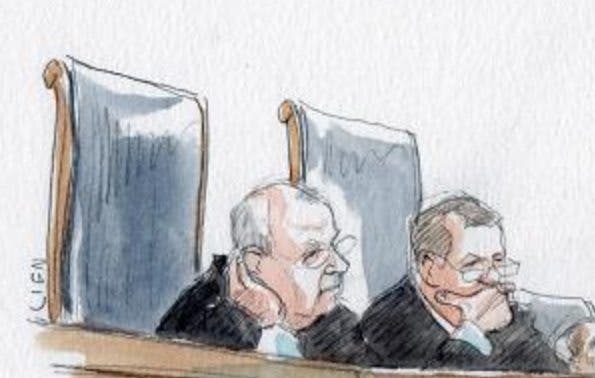 Supreme Court Justice Clarence Thomas is not exactly known for his vocal or energetic participation in Supreme Court cases. He spent ten years on the bench without ever asking a question of an attorney, until very recently – when he spoke up to defend the Constitutional right of spousal abusers to own firearms.

This recent courtroom drawing says all you need to know about Justice Clarence Thomas. He appears to be either deep in sleep or quite possibly dead. Nominated by George H.W. Bush in 1992, Clarence Thomas is a mark of the lasting damage that Republican presidencies can have on our nation – and not just from their four-years terms. Who could have guessed that nearly a decade later, Thomas would push the disastrous Citizens United decision upon us?

look at this drawing from SCOTUS oral arguments yesterday pic.twitter.com/eSTR9IiEfN