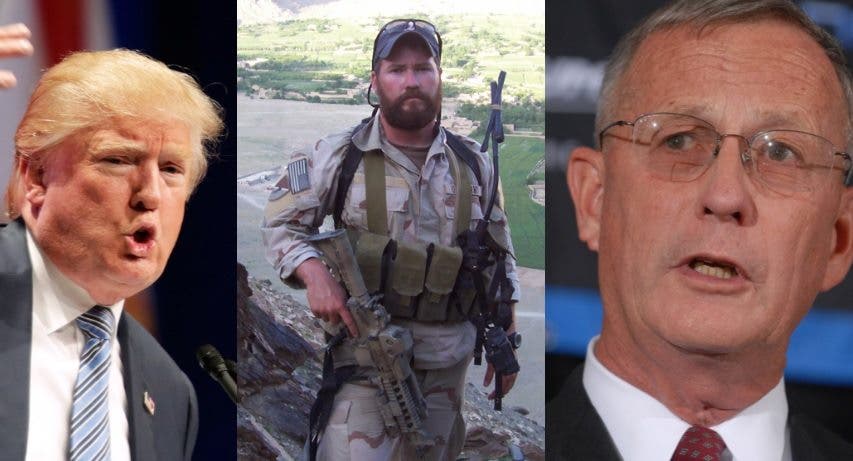 Republican front-runner Donald Trump spends most of his time on the trail draping himself in the flag. Waxing vague and disjointed rhetoric about his love for our troops and how he’s going to make our military “great” again, he has had no shame in using our veterans and our brave servicemen and women as a political soapbox. It’s already been made very clear that the our military commanders are not at all thrilled with his proposed foreign policy proposals, and are not appreciative of his constant assertions that somehow he – a draft-dodging socialite – is more qualified to run our armed forces than they are. “I know more about ISIS than the generals do. Believe me!” he said at a recent speech. “I’ve had a lot of wars of my own. I’m really good at war.”

Andy Kroll of the Huffington Post has spent the past two months speaking to retired and active military officers, intelligence officers to see just what they really think of a possible Donald Trump presidency, and they are overwhelmingly disgusted by his arrogance and his disregard for the value of human life, of experience and strategy, and of his efforts to paint himself as a patriot. “The words they used to describe their mood: Terrified. Shocked. Appalled. Never before, they say, has a candidate gotten so close to the White House with such little respect for the military.”

Col. Robert Killebrew (ret.) said that “he completely misunderstands the military profession that he would head if he were the president.” Retired special forces commander Michael Waltz calls Trump “a draft-dodger who hasn’t served this country a day in his life.” Vietnam veteran Tom Hanton said Trump’s cheap shots at Senator John McCain for getting shot down and captured (“I like people who weren’t captured!”) were “the most infuriating comment I think I’ve heard from a politician in my entire life.” One former Marine infantry officer said that Trump was a “fake-bake-ing chicken hawk whose knowledge of the Middle East could be trumped (sorry) by your average Georgetown sophomore.”

They also aren’t fond of his team of “foreign policy advisers,” many of whom have barely any experience at all – and the rest are dangerous neocons and Islamophobes. Former University of North Carolina professor Richard Kohn said that “They’re probably the least qualified group of foreign policy and national security advisers I’ve ever seen or even heard of.”

But the most damning comment came from Michael Breen, CEO of the Truman National Security Project and a decorated former Army officer. “If we take him at his word, we have a presidential candidate who seems to have committed himself to triggering what would probably be the greatest crisis in civil-military relations since the American Civil War.” Trump’s open plans to target and murder the families of Daesh (ISIS/ISIL) militants, and to compel the armed forces to use waterboarding and “a hell of a lot worse” torture techniques on detainees – both of which are very illegal – are setting our nation up for a showdown between the White House and the Pentagon that our nation cannot afford.

It’s gratifying to know that Donald Trump’s constant disrespect for the military is not going unnoticed. This draft-dodger once claimed that “sex was his personal Vietnam,” that his time at an expensive military academy “provided him with more military training than most actual soldiers,” and worked to ban disabled veterans from working as street vendors around his precious Trump Tower. On the campaign trail, he’s set up a hotline for veterans that goes to an automated voicemail and held fundraisers for vets and never paid out the money raised. Donald Trump is a clear and present danger to our national security, and is tremendously unqualified to be our commander-in-chief.