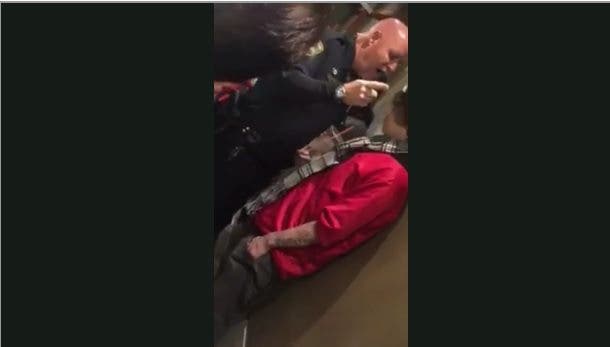 In this shocking video, an unidentified young woman is manhandled and ejected from a ladies’ bathroom by male police. Because she didn’t adhere to their ideas of how a woman is “supposed to dress,” they accused her of being a male and invaded her space, humiliating and insulting her in their ignorance and bigotry. While onlookers yell at the cops that “she’s a girl” and inform them that she is a lesbian who chooses to not conform to conventional gender standards, the cops angrily demand ID of “sir” and then frisk the woman after she is unable to produce identification.

The video was posted to Facebook by prominent BlackLivesMatter activist Tamara McDaniels. There is no indication of where this takes place, but as she references the bathroom laws passed in North Carolina and Mississippi in her post description, one can make a reasonable guess:

“Lesbian harassed and forced to leave a public restroom because the police insist she’s a man. Is this what “Make America Great Again” means? This makes me very sad and I want no part of this irrational fear.
I mean, you can’t think of a 1000 ways these laws will be used as an excuse to harass, humiliate, and arrest people? SMDH”

This is a disgusting episode of gender discrimination that reveals just how ignorant some people can be. It is really quite shocking how conservatives are so threatened by women doesn’t choose to present herself as in the way that she’s expected to. If small-government conservatives really mean what they say, how can they justify policing bathrooms and telling women what they should and shouldn’t wear?