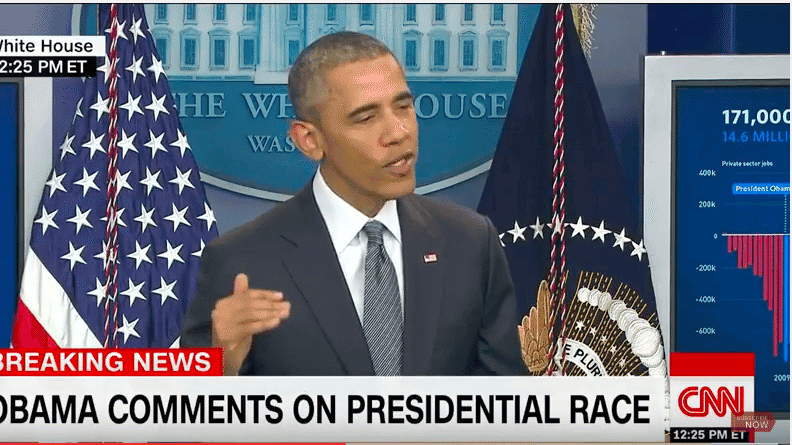 In an afternoon press briefing at the White House today President Obama had some harsh criticism for both Donald Trump and the media’s handling of his candidacy. “I just want to emphasize the degree to which we are in serious times and this is a really serious job,” Obama said. “This is not entertainment. This is not a reality show. This is a contest for the presidency of the United States.”

As self-evident as these words should be, they are a timely and pertinent criticism of the degree to which Donald Trump – and indeed the entire GOP nominating process – has devolved from serious debates on policy, ideology, and issues into the realm of spectacle, farce, and absurdity. The president also offered a stern rebuke to the news media for feeding into this political degeneracy by essentially treating the nominating process as a reality TV show rather than a legitimate ideological contest:

What I’m concerned about is the degree to which reporting and information starts emphasizing the spectacle and the circus. Because that’s not something we can afford. Every nominee needs to be subject to exacting standards and genuine scrutiny. It means that you’ve got to make sure that their budgets add up. It means that if they say they’ve got an answer to a problem, that it is actually plausible, and that they have details for how it would work

The interplay between the circus-like inanity of 24 hour TV news coverage and the apparently endless vanity and bigotry of the ignorance population is complex, but to be sure the electoral process, our democracy, and our nation suffer serious harm when facts and even beliefs become superfluous, relegated to the sidelines by screaming populism and childish personal attacks.

Watch the briefing below: