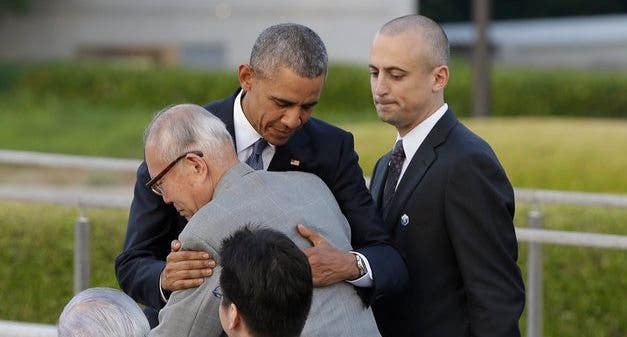 President Obama has made history once again. Our Commander-in-Chief touched down in Japan today, where he became the first American leader to visit the city of Hiroshima, where Pres. Harry Truman dropped the first nuclear weapon. Over 100,000 died in the blast; mutations and bizarre cancers from the radioactive fallout still hound the area to this day.

The President gave a somber and heartfelt speech at the Hiroshima Memorial Peace Park, warning the world about the dangers of nuclear proliferation and allowing the irrationality of fear to dictate our actions.  “Death fell from the sky and the world was changed” said Mr. Obama.

“That is a future we can choose. A future in which Hiroshima and Nagasaki are known not as the dawn of atomic warfare but as the start of our own moral awakening. We may not eliminate mankind’s capacity to do evil. But among those nations like my own that hold nuclear stockpiles, we must have the courage to escape the logic of fear and pursue a world without them.”

The visit is a sharp reminder of humanity’s ability to inflict destruction on a massive scale at the push of a button. An acknowledgement of how so much of our energy and resources are sacrificed on the altar of death while millions languish without access to the most basic human necessities. A warning that humanity must heed as tensions between global powers heighten and the pressures of climate change set the stage for vicious resource wars.

President Obama has made putting an end to the scourge of nuclear weapons one of his top priorities; the importance of his successful neutralization of the Iranian nuclear enrichment program by peaceful negotiation cannot be understated. As the election draws closer, the importance of choosing a worthy successor – one who places a value on human lives and the pursuit of peaceful resolutions to humanity’s perpetual conflicts – has never been more pressing. The lessons of Hiroshima and Nagasaki must not be forgotten.