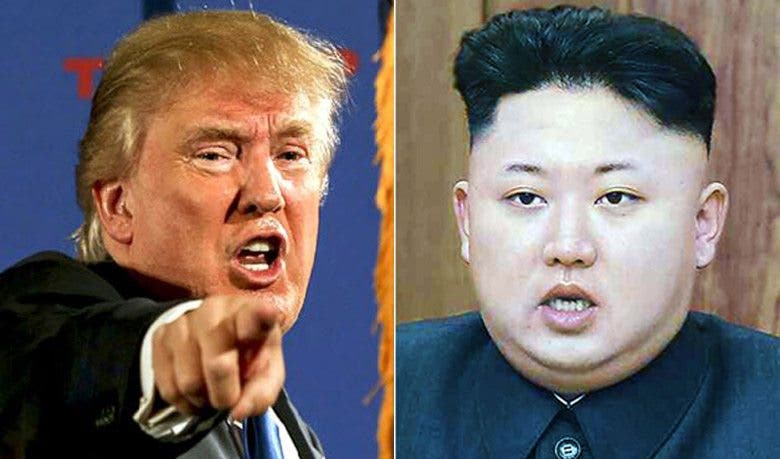 Republican Presidential nominee Donald Trump has been endorsed by the North Korea’s eccentric Stalinist dictatorship for endorsing the regime’s “Yankee Go Home” slogan.  That’s right, Donald Trump was just endorsed by the “Dear Leader” of North Korea’s ultra-repressive dictatorship as a “wise politician” for caving to their destructive demands.  This is the very same North Korean dictator who developed nuclear weapons in defiance of international agreements they signed and is now busy rattling the world’s cage with ballistic missile launches.

Even before today’s surprise autocrat endorsement, Republican party leader Donald Trump was supported by an inclusive bunch of hate groups like the KKK and Matthew Heimbach, as well as bloody dictators like Russia’s Vladimir Putin.  So, North Korea probably feels it’s in good company hitching its good fortunes onto Trump and the Republican party’s nihilism platform. Kim Jong Un is probably truly wishing that the reality TV star will implement a plan to abandon our country’s South Korean allies into war with North Korea, whose more than 1,000,000 soldiers comprise the 4th largest standing army in the world, and they sit mostly near the Demilitarized Zone or DMZ waiting for any sign to attack Seoul just 35 miles to the south.

But Donald Trump has a zany, off the cuff idea, to demand more money from South Korea because it’ll sound good to someone who’s got absolutely no clue how to find it on a map, or why it’s so important to the average American. So he blabbed about it, and this is the result. Just imagine the never ending pain South Koreans – who would never trust America ever again – would have to endure, if our country abandoned them to be killed and politically swallowed by the world’s cruelest dictatorship and its soldiers.

American troops have guaranteed the peace in Korea for six decades, ever since the armistice that ended hostilities in the Korean War. Unfortunately, Republican President Dwight Eisenhower didn’t secure a peace treaty, but only that permanent cease fire, which is where things stand today.

Now, almost everyone in America enjoys the benefits of our alliance with the South Koreans.  We send South Korean companies our dollars and an inexpensive troop presence in exchange for smart phones, LED TVs and screens for our devices and cars like Kias and Hyundais (now the most popular car in New York). Americans even dance Gangnam Style, and we have a population of 1.7 million Korean-Americans concentrated most heavily in California, New York and Texas.

It does make sense that an inveterate liar like Donald Trump would appeal to the North Korean dictatorship, after all, he denies reality and craves pageantry just like the world’s most oppressive government. Just this holiday weekend, Trump pronounced a Washington DC rally to have attracted 600,000 attendees, when the organizers reported a comically small crowd of just 5,000 people. This sent the vulgar real estate branding maven into a tizzy, complaining that MLK drew a much better crowd for his message of tolerance and inclusion, than his message of hatred, xenophobia and irrational economic babbling that somehow passes for “ideas” in the modern Republican party.

Maybe, Donald Trump is running for North Korean President and none of us knew it. Trump would fit right into the Stalinist regime’s oppressive government with his temper tantrums against the critical press more easily translated into real world action without a Constitution or First Amendment protecting free speech. Recently, North Korea invited a few journalists for to a rare visit inside the capital of Pyongyang, until kicking the BBC out for “disrespectful” reporting – which mean asking actual questions and expressing the reporters’ disbelief for the open charades they’d witnessed.

It’s this election’s latest big reason why world leaders are deathly afraid of Trump and his Republican friends could ever hold our country’s highest office, and yet another reason Democrats must work extra hard to patiently explain that their party’s nominee is the only candidate qualified for the job.

At any rate, North Korea’s dictator must be pretty satisfied by moving up from having fun with kooky ex-NBA player Dennis Rodman to patting a major party candidate, the Republican presidential candidate Donald Trump on the back for turning our political process into something stupid like yet another crappy reality TV show adopting the same goals set by the totalitarian regime.