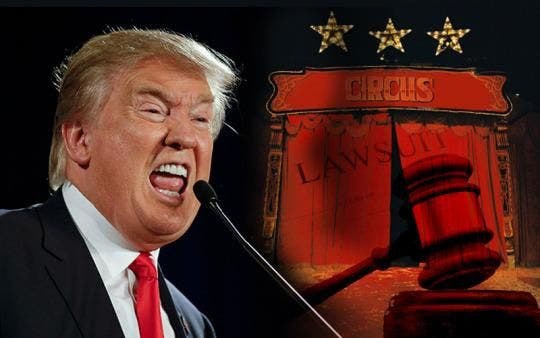 Republican nominee Donald Trump has used his career as a business man as an important source of legitimacy for his upstart campaign, holding up false valuations of his own wealth as evidence that he is a “dealmaker” and a “negotiator.” It’s become glaringly clear that neither of those things are true. The extraordinary number of lawsuits that he has instigated and received is evidence enough that his business career has been conducted primarily through litigious bullying and by cheating, extortion, or misrepresentation.

Trump and his real estate “empire” have been involved in a staggering 3,500 lawsuits over the past thirty years – with a jaw-dropping 70 filed since the start of the election alone. USA Today found that he has been the plaintiff for 1,900 of them and defendant for 1,300 lawsuits. No nominee in the history of the United States has ever been part of so many lawsuits, and they are a stark warning as to how Trump might conduct himself as Commander-in-Chief.

USA Today notes that “he sometimes responds to even small disputes with overwhelming legal force. He doesn’t hesitate to deploy his wealth and legal firepower against adversaries with limited resources, such as homeowners. He sometimes refuses to pay real estate brokers, lawyers and other vendors.” A dishonest cheat who maliciously bullies anyone who would dare stand up to him, the enormous mess of lawsuits paints a picture not of a leader, but of who we knew he was all along – a spoilt, impulsive man-child living in a world of delusion fueled by his own narcissism and insecurity.

As the mainstream media machine finally rumbles into attack mode, fallout from the Trump University lawsuits is beginning to rain on the tycoon’s parade – and the radioactive scandal has the potential to turn cancerous. Trump has gotten this far by convincing the common people that he is “on their side” and that he is an honest businessman.

But now we have  a mountain of evidence – not of a few isolated cases, but literally thousands of incidents in which he has used his wealth and position to extort and bully every-day Americans out of their hard-earned money, just like all the other Wall Street oligarchs do.  There can be no denying that Trump is a liar, a cheat, and supremely unqualified to go anywhere near the Oval Office – and we must flood the airwaves with evidence of his treachery until people wake up and smell the hairspray.

Colin Taylor
Opinion columnist and former editor-in-chief of Occupy Democrats. He graduated from Bennington College with a Bachelor's degree in history and political science. He now focuses on advancing the cause of social justice and equality in America.
Latest Posts
Tags
lawsuits Trump USA Today