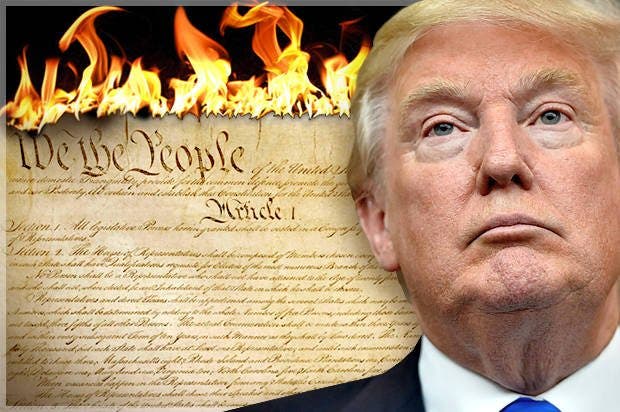 Presumptive Republican nominee Donald Trump has gotten so out of hand that conservative and libertarian scholars are turning on him, horrified by his flagrant disregard of the Constitution. The New York Times noted today that legal scholars across the political spectrum are warning that Donald Trump could provoke a constitutional crisis – and possibly impeachment – within his first month if he is elected. “Who knows what Donald Trump with a pen and phone would do?” asks Ilya Shapiro of the CATO Institute.

Many Republicans like to paint themselves as defenders of the Constitution, not realizing – or possibly caring – that their candidate is possibly the biggest threat to the Constitution yet seen in the modern era while displaying a frustrating ignorance for the Constitution their own selves. Legal scholars see three main areas where Trump’s scary rhetoric has crossed over into anti-Constitutional, dictator-esque territory: his proposed ban on Muslims, his plan to rewrite libel laws to protect public figures (i.e. himself) from public scrutiny, and his total disregard for the judiciary.

The First Amendment protects, among other things, the separation of church and state, the right to one’s own religious beliefs, and the freedom of the press. He has suggested a ban on Muslims entering the country, supposedly in the interest of national security. Considering how much time conservatives spend demanding sweeping religious rights for Christians, many were quick to support the ban. Trump has also refused to rule out creating a database of Muslims in America to improve surveillance, an equally unconstitutional and appallingly discriminatory idea.

His disdain for the First Amendment extends beyond religious freedoms to the freedom of the press. Libel laws exist to protect private citizens from being publicly defamed, but the laws apply differently to public figures, since public figures can be rightfully scrutinized by the public. Trump’s overly-sensitive ego is constantly bruised by the negative coverage he is finally starting to receive from the mainstream press, and in his typical bullying fashion, Trump wants to put a stop to it. He says, “We’re going to open up libel laws and we’re going to have people sue you [reporters] like you’ve never got sued before.”

The president of the National Press Club explained, “Reporters are supposed to hold public figures accountable. Any American political candidate who attacks the press for doing its job is campaigning in the wrong country.In the United States, under our Constitution, a free press is a check on politicians of all parties.” Trump doesn’t seem to care that he is running in the wrong country. He has expressed admiration for Russian Federation President Vladimir Putin, who has managed his image by attacking and jailing, and even murdering any reporters who dare to criticize him. Have conservative Constitution-lovers not realized that the man who might become the American President would like to copy dictatorships like Russia that stifle the free press?

Another cornerstone of the Constitution is the separation of branches of government. The presidency, legislature, and judiciary have separate powers so no tyrannical dictatorship can emerge. Recently, Trump has been attacking Judge Gonzalo Curiel, the Federal District judge who is overseeing the lawsuits against his Trump University scam. Furthermore, he has suggested that his lawsuits should wait to proceed until he is president, based solely on his desire to avoid bad press during the general election. Conservative legal scholar David Post explains, that “this is how authoritarianism starts, with a president who does not respect the judiciary.”

The right needs to wake up and realize that they are supporting a candidate who wants to violate major pillars of the Constitution and make America more like a dictatorship, and less like the free country its founders intended.