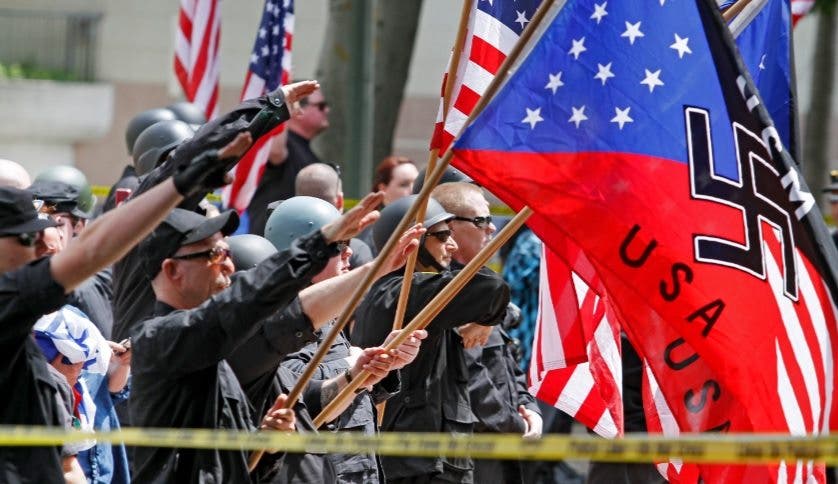 Legal Scholars: Trump Is So Ignorant He’s A “Recipe For A Constitutional Crisis”

The undercurrent of white supremacy and racial discrimination that the Republican Party has been quietly cultivating for decades has exploded into mainstream politics with the crowning of ethnonationalist demagogue Donald Trump as the GOP’s nomination for the presidency. Seizing on the opening that Trump’s anti-immigrant scapegoating has created, bigots have grown increasingly bold over the past few months, culminating in racially-motivated attacks on minorities – both in the real world and in the digital sphere.

Neo-Nazi Trump fans have recently created a browser extension for Google Chrome that highlights Jewish journalists and bloggers with an “echo” tag consisting of three parentheses, defining targets for other neo-Nazis to attack and harass while supposedly shining a light on the way that Jewish people are colluding to slander Trump while promoting Hillary Clinton. This is in reference to, of course, the long-standing but utterly absurd conspiracy that Jews control the media and so on and so forth.

“With this tool you begin to see patterns, constant bias, a common theme…You want it deny it, rationalize it, fine, but we see it constantly. And that plugin shows it” wrote one neo-Nazi on Twitter. Trump supporter, former Ku Klux Klan leader and vice-president wannabe David Duke recently took to his radio show to blame mass shootings on the Jewish control of the media.

It is extremely disturbing to see that Trump supporters, who have already made a name for themselves with their attacks on Hispanics, blacks, and Muslims, are now gearing up for the targeted harassment of not just Jewish-Americans – but against journalists and free speech itself. This is not only a blatant attack on our proud tradition of independent journalism but also the revival of horrifying stereotypes and conspiracies that played a large role in perpetuating the worst genocide that our world has ever seen. The idea that a candidate for the United States presidency is inspiring such hatred and provoking these kinds of attacks is an existential blow to the foundation of multiculturalism and tolerance that our nation was founded on, and we cannot allow this ethnic discrimination to be legitimized by his ascension to the Oval Office.

Some tweets on the issue:

LOL. The SPLC put echoes around their name.
Can we meme them into getting into the oven next? pic.twitter.com/Y1W0Wehd45

@prez_davis The (((echoes))) must remind them of the bogus Jew stars they pretend the Nazis made them wear.