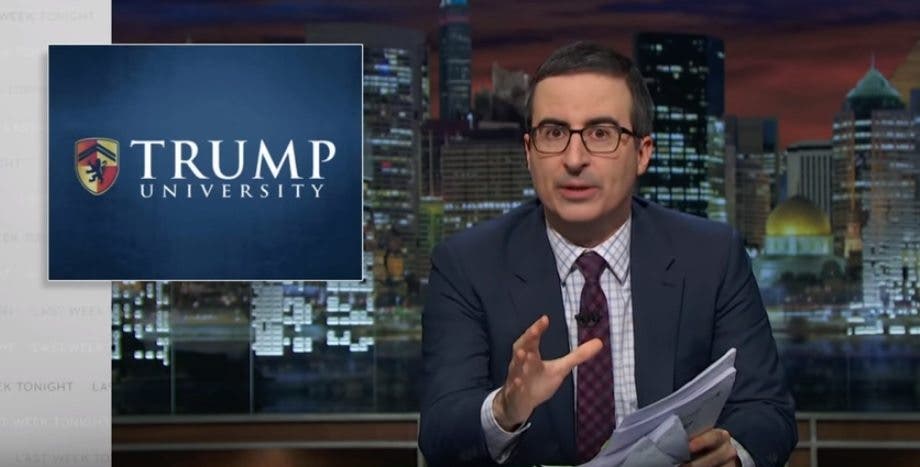 A Democrat Just Told Trump Exactly Where To Place His Wall, And It’s Perfect

In this clip from HBO’s Last Week Tonight, hosted by ex-Daily Show star John Oliver, the long and sordid tale of Trump University is broken down and summarized with Oliver’s signature wit and snark. Trump University was nothing but a now-notorious “bait-and-switch” extortion scheme that bilked tens of thousands of dollars out of ordinary Americans who dreamed of finding success in the business world but only found themselves poor, with nothing to show for their investment.

Oliver brooks no punches when it comes to the elaborate scheme. “Trump University wasn’t even a university, which makes you wonder: what the f*ck was in Trump Steaks? Possum?” demands Oliver. “But the name was just the beginning, because remember how he had ‘handpicked instructors?’ Well, according to his own depositions, he did not personally select instructors for live seminars, and was unable to recall the names of key faculty members.”

“And it doesn’t stop there. According to sworn testimony by several former employees, many instructors and mentors had no experience buying and selling real estate. In fact, one had worked as a salesman for Lowe’s, and another had been manager for Buffalo Wild Wings. And even a member of Trump’s own sales staff testified that it was, among other things, ‘a joke… a façade… and it was just selling false hopes and lies.’”

Now the subject of two different class-action lawsuits, Trump University is perhaps the best illustration of just what kind of a man Donald Trump truly is – a liar and a cheat with absolutely no moral compass or any empathy for the thousands of everyday Americans that he stole from. Spreading the story of Trump University is one of the most important weapons we have towards stopping him – to show the American people that he doesn’t care about them or their problems, and that Trump only cares about himself.

Add your name to call on prosecutors to ARREST DONALD TRUMP for his crimes!Advertisements
Tags
John Oliver style Trump