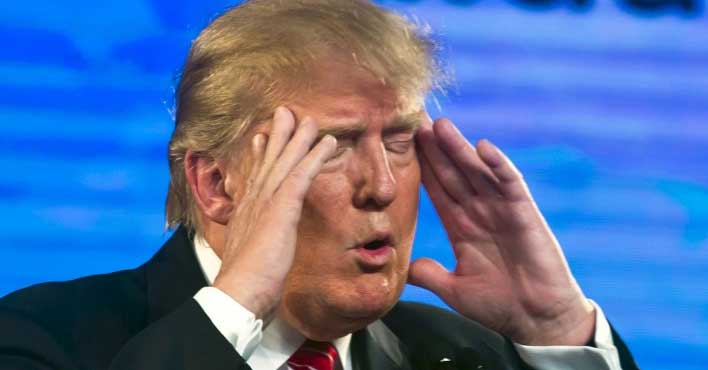 Stanford Rapist Just Gave The Most Outrageous Excuse For His Crimes

Donald Trump has made our armed forces and our veterans a central part of his campaign platform, even if his policies and opinions are constantly contradicting each other. He promises to donate to veterans’ charities and then keeps the money himself and he claims to love our and respect our vets but then mocks real-life war heroes for getting captured and disrespects their sacrifices with jokes like “sleeping around was my personal Vietnam” and that the swanky boarding school he went to was “like being in the military.”

Much has been made of Trump’s draft deferments, but new evidence has surfaced that proves once and for all that the spoiled little socialite not only dodged the Vietnam war draft five times, but that his excuses for not going to war were entirely fabricated. He first received a number of deferments so that he could attend Fordham University and then the Wharton School of Business, and then claimed that he had a “bone spur” in his foot which “prevented” him from joining the 2,700,000 Americans who served their nation in the Vietnam War.

Does this look like a man unfit for military service? 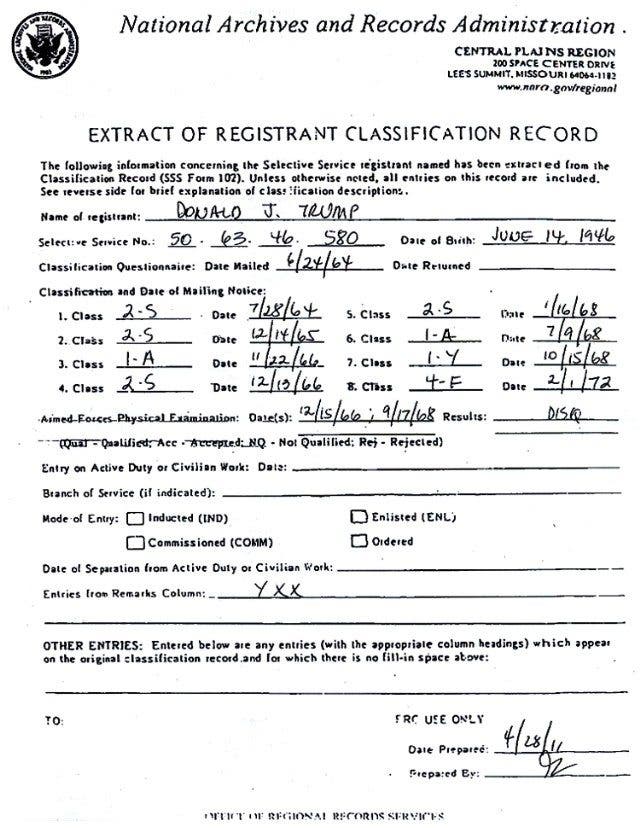 Death and Taxes explains that “as evidenced in the document below, Trump received draft deferments in 1964, 1965, 1966, and 1968. The years marked 2-S are college deferments; 1-A means available for unrestricted military service; 1-Y means available only in national emergencies such as war, and finally 4-F means ‘Registrant not acceptable for military service,’ which means Trump was found not qualified under the military’s ‘established physical, mental, or moral standards.'”

Regarding the “bone spur,” Trump biographer Wayne Barrett told the New York Daily News that “I doubt it was a serious medical issue. Up to that time, he was an active athlete. It was bullshit. I never heard of any foot problem other than them being well-placed in his mouth.”

Instead of doing his duty to his country and making the same sacrifices that an entire generation of Americans had to make, the craven capitalist lied his way out of military service and then used a “small loan” from his father of only a million dollars to lie, cheat, and extort his way to a fortune. Not exactly a man of principle and moral character, and certainly someone who should not be allowed to send our brave fighting men and women into harm’s way.

Listening to Republican nominee Donald Trump speak of foreign policy, you’d be hard-pressed to figure out what he actually wants to do or if he has any idea what he’s talking about. But one theme does stand clearly out – that he heavily favors military intervention and sending our brave fighting men and women off to fight and die in foreign countries. He may not show any understanding of how that would actually work – like when he demanded a “surgical strike” to “save [Libyan civilians’] lives” – which is not a mission that is not a mission that can be conducted “surgically” – but all his assertions that we will “knock the sh*t out of ISIS” will involve American soldiers on the ground in Syria and Iraq. Trump is a coward and a narcissist, incapable of considering the well-being of others, which makes him uniquely unqualified to be our Commander-in-Chief. To elect him as so would be a horrendous disrespect not only to the almost 60,000 Americans who died in the jungles of Vietnam but to the institution of the American armed forces as a whole.