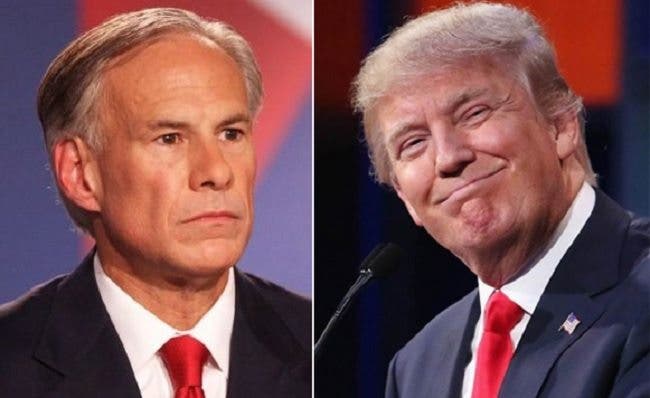 Guess which Texas Republican is the only politician who Donald Trump contributed to his campaign, and is coincidentally the same person who used his political power to abruptly end the probe of Trump University for criminal misconduct? That former Texas Attorney General is now Republican Governor Greg Abbott. He ended the case against Trump University, then a few years later received $35,000 in campaign contributions as his reward. All told, Donald Trump was facing a settlement cost of $5,400,000, but Texas Republican Greg Abbott let him off the hook with nothing more than a promise to leave Texas, leaving taxpayers on the hook for the costs of investigating, and leaving scammed students in the lurch.

State prosecutors then led by Republican Greg Abbott spent eight long months hot in pursuit of the fake education scheme pushed by Trump’s “instructors” at hotel ballrooms. On January 6th, 2010 prosecutors sent an ominous “Civil Investigative Demand” letter to Trump University. Then, in May 2010 the State of Texas’ attorneys wanted to settle with Trump for full refunds of not only the $3.7 million dollars going back to his scammed students but also the $1.7 million in fines and legal costs that his victims racked up in their pursuit of justice. Texas prosecutors built their case in writing, and cited the numerous legal violations in a memo, and they also wrote this ominous conclusion about Donald Trump’s potential legal defenses for operating his racket:

We believe there is a possibility that Trump University will file for bankruptcy, primarily to stay both the California federal court class action and this case.

Under the Texas Deceptive Trade Practices and Consumer Protection Act, the state’s attorney has the right to request a copy of advertising documents, and what’s being given to the public for inspection, including the now infamous “Playbooks” and organizational charts, contracts, etc. Trump U was ordered retain all records for inspection and deliver by February 1st, 2010.Newly unsealed court records show that the scam’s “playbook” instructed high pressure pitchmen to use shame in their interrogation of “prospects” and “clients” who were just marks and not actually considered “students” at the Trump University. The Texas authorities came to believe Trump University broke the state law saying that:

Defendants falsely assert at these “free workshops” that the classes are approved continuing education· credit for realtors. The Texas Real Estate Commission has not approved any Trump University courses for continuing education credit. Defendant Trump University is also not an accredited institution of higher learning and does not have a certificate of authority to use the term “University” in the state of Texas in violation of TEX. EDUC. CODE§ 6.313. Trump University has also not complied with Secretary of State registration or tax requirements necessary to do business in Texas or paid sales tax on any of their sales.

The unraveling of the Trump University scam is a metaphor for the entire act pulled by the presumptive Republican nominee on a gullible political party willing to believe anything they want to hear. Now we know that Trump’s claim to give money to all of the politicians is more than just business as usual. Florida’s Attorney General took a bribe to end the investigation into Trump University. Trump even was accused of offering an illegal bribe to his vanquished Republican foe Ben Carson too.

The only surprise here is that we all thought presumptive Republican Presidential nominee Donald Trump was an uncommon racketeering con-man, but he’s actually just another run-of-the-mill crony capitalist who corrupts other Republican politicians because he desperately needs their back-room deals to avoid personal bankruptcy for his business blunders.