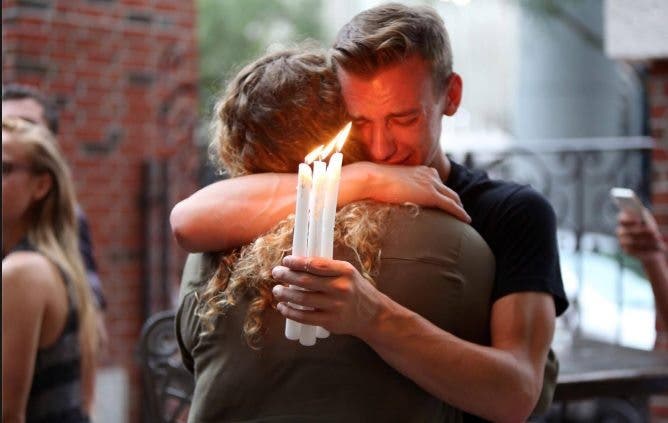 Yesterday’s horrifying massacre at an Orlando gay club has prompted a firestorm of debate which the far-right is working overtime to redirect towards the ethereal threat of radical Islamic terrorism instead of issues which we can quickly and effectively take action to resolve – the reckless proliferation of deadly firearms specifically designed to slaughter among a civilian population that has proved time and time again that they are far too irresponsible to be allowed to have.

The extremism with which gun owners approach America’s epidemic of gun violence and their obstinate refusal to even consider any kind of commonsense reform legislation is directly contributing to the deaths of thousands of Americans every year. This open letter from an Occupy Democrats member and gun owner, Fonzie Graziano, should be read and taken to heart by all Americans. We bury too many of our countrymen every day. Our chronic inaction after every massacre simply sets us up for the next one. We must break the cycle of murder, and only as a nation can we make any kind of substantial progress.

An Open Letter To My Fellow Gun Owners Following The Orlando Massacre:

You know what? In the wake of THE WORST mass shooting in American history, I wish I could say that I too am, “in tears.” But I cannot, because I am not. Although devastated and heartbroken, I am not crying. I am not crying because I am mad as all hell. I am mad at the assailant, mad at the situation, mad for the victims, mad at our political system, and mad at many of YOU – my fellow Americans.

To the victims and the families of those lost last night, I beg you not to let your anger, your pain, your fear, and your feelings of loneliness catalyze to the same ignorance, anger, and fear that lead Omar Mateen to commit his atrocious crimes against humanity. Omar Mateen was a sick and radicalized individual but in your time of bereavement I must remind you to look on this monster with compassion. Although he showed your loved ones no mercy or compassion, YOU are not the monster he is, for FORGIVENESS and TIME are the ultimate healers.

Nothing can ever replace what was taken from you, but in the interest of the common good, the best thing that will come out of this tragedy is the hope that if our political representatives hear our call to act so that the sacrifice of your sons and daughters will not be in vein.

To my fellow Americans, your prayers, your tears, and your thoughts are not going to keep an Omar Mateen, a James Holmes, an Adam Lanza, or an Eric Harris and Dylan Klebold from our clubs, our movie theaters, safe from our children in elementary, or our teenagers in class- your voices and your votes are. Sharing your superficial bout of grief on social media is not going to fix anything. Fear mongering and “I told you so’s’’ aren’t going to fix anything because Islam did not do this. Muslims are some of the most peaceful people I’ve ever had the pleasure to meet.

Guns did not do this. I own guns and they have yet to jump up and kill people spontaneously to their own accord. Blaming guns, blaming Muslims, blaming ISIS, blaming Republicans/Democrats, or the President is not going to fix anything. But you know what will? Doing what I plan to do first thing Monday morning – calling my Congressional Representative and pressuring him/her to act on common sense gun regulation. Sure many will say “guns don’t kill people,” and they are right. People kill people, but too often, they use guns.

Calling your representatives is the first step. Calling your representatives and making the case to them that our future and the future of our sons and daughters is worth far more than black gun money used to fund their political campaigns. I am not advocating for an all out ban on guns, which many on the right will read from my words. I am advocating for universal and comprehensive background checks. I am advocating for the closing of the Charleston and gun show loopholes. I advocate making it illegal for online dealers to ship product except through an FFL. And I am advocating for harsher punishments to those who chose to commit gun crimes. Our only chance of surviving the 240-year-old onslaught against this country is to stand together as we always have, as people, as friends, as Americans, and as human beings. Peace, tolerance, understanding, fairness, justice and diversity are the pillars that make up the foundation of our beloved country and are the very same values that make America great.

Add your name to call on prosecutors to ARREST DONALD TRUMP for his crimes!Advertisements
Tags
gun nra style