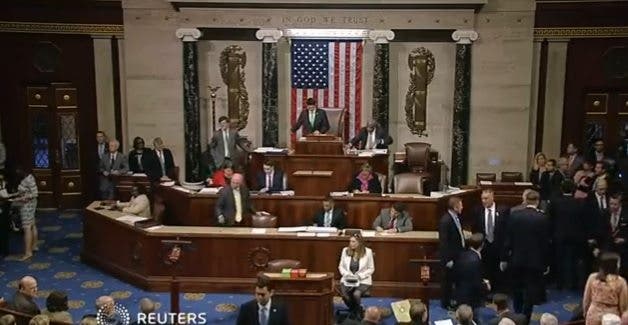 Democrat representative in Congress are fed up and refuse to stay silent after yet another mass shooting. At the end of a moment of silence for the victims of the Pulse nightclub massacre in Orlando, House Democrats erupted in shouts of anger and indignation, calling out, “Where’s the bill?” and, “No leadership!” Left wing lawmakers are finally taking a stand against the right wing and demanding an end to the policy of just giving “thoughts and prayers” after mass shootings, and instead advocating for the introduction a real policy that might prevent future atrocities.

Republicans bought-off by the National Rifle Association (NRA) have long refused to implement any kind of gun law reform – even  in the face of mass shootings, fearing that they might lose millions of dollars in funding. The NRA has long history of manipulating politicians with vast sums of money, cutting their campaign donations and launching a smear campaign against them whenever they deviate from the NRA’s agenda. The NRA itself has a long established policy of staying silent after mass shootings, because they can’t say anything with a straight face without admitting the blood on their hands.

The NRA and their Republican minions have time and again refused to acknowledge the role that guns play in mass shootings. When guns are easily accessible, it is easy for potential attackers to get their hands on gun; this is particularly lethal since in America many assault weapons that have no use in sport are readily available. Omar Mateen, the gunman behind the Pulse tragedy, was able to shoot over 100 people with an AR-15 (a semi-automatic firearm that can easily be modified to be an automatic that was also used in the Newtown and San Bernardino shootings) – many more people than he could have attacked with a knife, or even a handgun. Assault weapons have no use except for the creation of destruction and carnage, and the loss of human life. America has been plagued by more mass shootings than any other country, and we need to stop responding with moments of silence and start responding by enacting real change in gun laws – particularly laws that restrict access to assault weapons – that might finally put a stop to the horrors of gun violence.