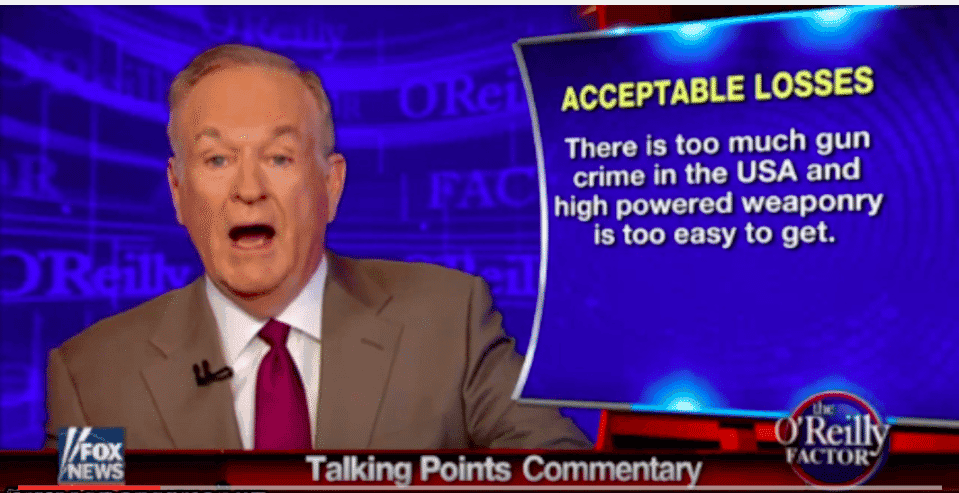 Her Grandson Was Killed in Orlando. Passengers on Flight to Funeral Responded BEAUTIFULLY…

You know something is really wrong in America when even Bill O’Reilly thinks we need to reassess our lax gun laws. Although O’Reilly has always been a staunch advocate of loose gun restrictions, but today on The O’Reilly Factor, he finally admitted that we need an outright ban on deadly assault weapons.

He said, “There is too much gun crime in the USA, and high powered weaponry is too easy to get. That’s the fact. So let’s deal with it. We all have the right to bear arms, but we don’t have the right to buy and maintain mortars — even if you feel threatened by gangsters or a New World Order. No bazookas, no Sherman tanks, no hand grenades.” Furthermore, “It is perfectly legitimate for Congress then to say what kind of rifles should people be able to buy? … In 1996 they did stop many of the high tech rifles – they banned them. And that lapsed. We should look at that.”

All we can say is thank goodness the right wing is starting to see a little glimmer of common sense. Civilians have no reason to be carrying around assault weapons – they are lethal and serve no purpose except creating carnage and spreading devastation. The proliferation of firearms has enabled deranged attackers to acquire the tools they need to slaughter American citizens. O’Reilly has been complicit in creating a culture that values the most expansive interpretation of the Second Amendment over American lives. It is about time that he realizes how much damage his gun-freedom crusade has caused and changes his tune.