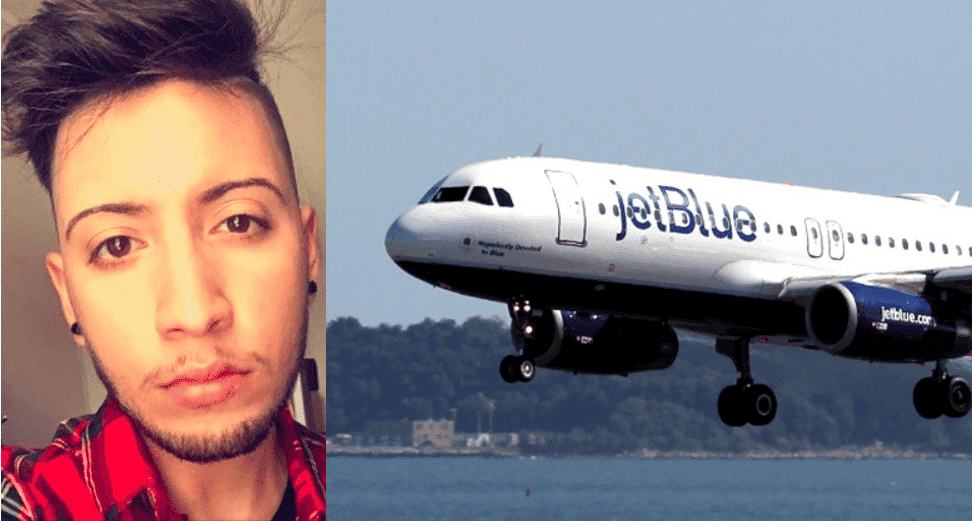 Jet Blue Airlines offered free fares to the family and loved ones of the Orlando Shooting victims, and what happened next revealed the empathy and love that Americans feel for the victims of the tragic hate crime that took the lives of 49 people.  The grieving grandmother of Pulse nightclub shooting victim Luis Omar Ocasio-Capo’ boarded the flight in her wheelchair boarded the flight to Orlando for what would be a be a sad flight to pay her last respects to a grandchild she always expected to outlive herself.

Melina was in tears by the end of the flight, because one of the flight stewards had and idea. As she wrote on Facebook:

Today my dear friend and stewardess Melinda and I had the sad privilege of attending to his grandmother on our flight as she made her journey to Orlando to join her family during this unspeakable time.

Knowing she was making this hard journey alone, JetBlue employees made sure to be at her side every step of the way. Melinda stood quietly by her wheelchair while we waited until it was time to board. Kellie, the gate agent, boarded with her and helped get her settled. Melinda and I gave her a blanket, a pillow, a box of tissues and water so she could be as comfortable as possible. She was understandably distraught, but met us with kindness and gentleness. And gratitude.

But here’s where our flight got truly inspiring. I had the idea to pass around a piece of paper to everyone on board and invite them to sign it for this grieving grandmother. I talked it over with Melinda and she started the process from the back of the plane. As we took beverage orders, we whispered a heads up about the plan as we went.

Halfway through, Melinda called me, “Kel, I think you should start another paper from the front. Folks are writing PARAGRAPHS.” So I did. Then we started one in the middle. Lastly, running out of time on our hour and fifteen minute flight, we handed out pieces of paper to everyone still waiting.

When we gathered them together to present them to her, we didn’t have just a sheet of paper covered in names, which is what I had envisioned. Instead, we had page after page after page after page of long messages offering condolences, peace, love and support. There were even a couple of cash donations, and more than a few tears.

When we landed, I made an announcement that the company had emailed to us earlier in the morning to use as an optional addition to our normal landing announcement, which states “JetBlue stands with Orlando.”

Then with her permission and at the request of a couple of passengers, we offered a moment of silence in Omar’s memory.

As we deplaned, EVERY SINGLE PERSON STOPPED TO OFFER HER THEIR CONDOLENCES.

Some just said they were sorry, some touched her hand, some hugged her, some cried with her. But every single person stopped to speak to her, and not a single person was impatient at the slower deplaning process.

There is nothing positive about the tragedy of the Orlando Shooting, an act of domestic terror by a sad figure trapped between his biology and tastes as a bisexual man and his feelings of shame and internal rage which ultimately drove him over the edge, and back to Pulse nightclub, where the unspeakable horror unfolded.

But what makes America great, is that in times of tragedy, of disaster, of peril and war and the fight for survival, we the people, the citizens, stand united. There for each other. American generosity in the face of mortality and disaster is the single most resilient theme in the sweep of our nation’s history. It’s what created the “shining city on a hill” and when as a nation we cared for the victims of 9/11 or rebuilt Miami after Hurricane Andrew or put San Francisco together again after the big earthquake or raising Chicago from the ashes of its Great Fire. From many, into one – it’s on every one-dollar bill, but it’s not just a phrase.

It is an American idea.

We all stand with Orlando.

Kudos to the passengers and staff on that Jet Blue flight.