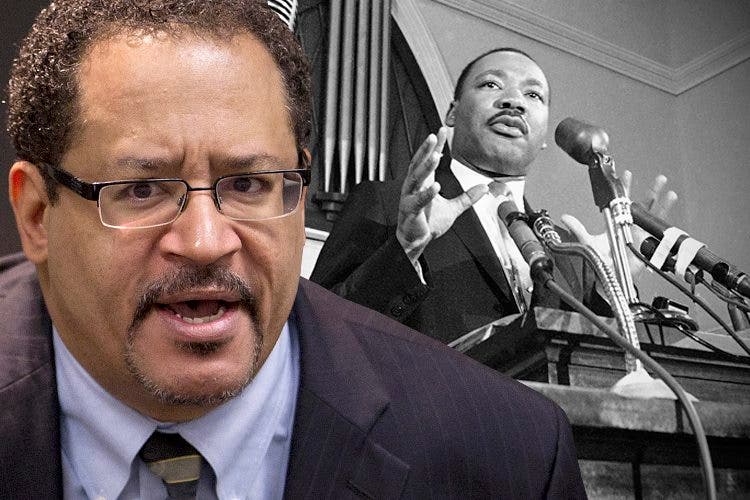 Professor Michael Eric Dyson has published an editorial in New Republic the moral duty of American citizens, and especially minorities, to protest Donald Trump at the Republican National Convention (RNC), “to proclaim the man’s moral repugnance and political illegitimacy.” Dyson argues that Trump’s misogyny, racism, and xenophobia cannot be tolerated in America, and Americans must take an unwavering stand in Cleveland, at Trump’s official coronation as the Republican nominee for the presidential election.

Increasingly, other Republican politicians have been voicing discomfort with Trump’s egocentric, bigoted persona, but Dyson doesn’t let them get away with it. Trump’s candidacy didn’t make itself – he courted the media and wooed most Republican politicians into endorsing him after Ted Cruz suspended his campaign in the spring. Dyson writes, “let us not forget that Frankenstein is the name of the doctor who invented the monster, not the monster itself. The party for which he is now standard-bearer must be held accountable for his creation.”

The protest he calls for goes beyond chastising Trump and the political elites who held their noses and let him in, when they should have slammed the door in his face:

“It is not simply a matter of voicing disapprobation for Trump; his supporters, too, must be answered. They are driven by rage that a black man today still represents a nation that once held black folk in chains, and which still depends on the law to check their social and political aspirations. Barack Obama so spooked the bigoted whites of this country that we are now faced with a racist explicitness that hasn’t emerged since the height of the civil rights movement.”

Dyson astutely points to the racial divisions that plague America, and which Trump’s campaign shamelessly exploits. Let us hope that protests and activism can thrust racism firmly into the past, where it belongs.