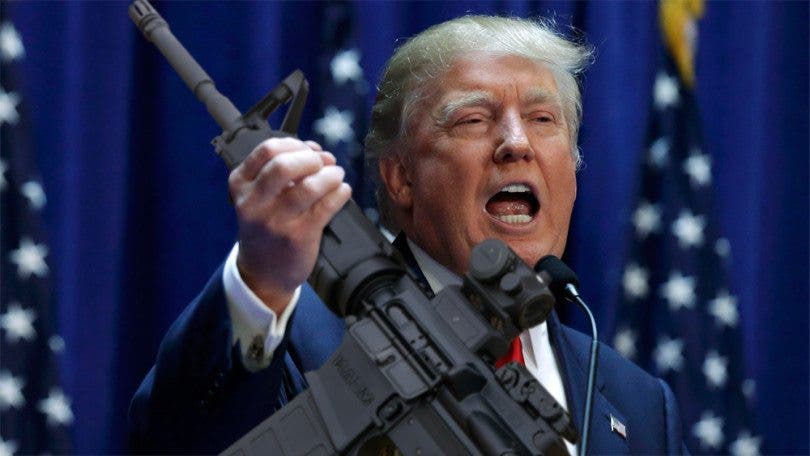 Top Economic Rating Agency: Trump WILL Send America Back Into A Recession, Kill Millions Of Jobs

Following the tsunami of murder apology and rampant Islamophobia issuing from America’s far right-wing in the wake of the horrific massacre at the Pulse nightclub in Orlando, Florida, we thought it was a fitting moment to remind the nation of the fact that the Republican Party will not be allowing guns at their national convention.

Yes, that’s right, the same political party whose obstinate refusal to consider even the most commonsense gun reform that would even amount to a minor inconvenience to gun owners has lead to the epidemic of gun violence which leaves around 300 Americans shot every day will not be allowing their beloved Second Amendment to be exercised at their convention. The same party that blames “gun free zones” and a lack of concealed carry laws for mass shootings is making their convention a gun-free zone.

This is ostensibly on the orders of the Secret Service, but the hypocrisy is truly unreal. They push for guns to be brought into every aspect of life – schools, the movie theater, grocery store, coffee shops – but refuse to have them at their own convention. This fact has not been lost on their supporters, 55,000 of whom have signed a petition demanding that they be allowed to bear their arms at the Republican National Convention in Cleveland, Ohio.

The petition was ostensibly started by a liberal seeking to call out the GOP on their hypocrisy. Citing the statements by major Republican candidates, including presumptive nominee Donald Trump, in which they vow to get rid of gun-free zones and the NRA’s own propaganda, the petition demands that they be allowed to defend themselves at the convention should they need to.

“This is a direct affront to the Second Amendment and puts all attendees at risk. As the National Rifle Association has made clear, “gun-free zones” such as the [convention venue] Quicken Loans Arena are “the worst and most dangerous of all lies. The NRA, our leading defender of gun rights, has also correctly pointed out that “gun free zones… tell every insane killer in America… (the) safest place to inflict maximum mayhem with minimum risk. Without the right to protect themselves, those at the Quicken Loans Arena will be sitting ducks, utterly helpless against evil-doers, criminals or others who wish to threaten the American way of life.” notes the petition.

The sarcasm is so sharp one can almost taste it. There is little chance that this petition will go anywhere. Given how often violence breaks out at Trump rallies, trouble is already expected at the Republican National Convention. The city of Cleveland is spending $50 million – in federal taxpayer dollars, one should note – to purchase body armor, riot shields, and the ubiquitous batons to keep the peace.

Not even the Republican National Committee is foolish enough to allow firearms into their convention, especially one where it is looking increasingly likely that they may try to wrest the nomination away from Donald Trump. The author is fond of joking that should they do this, the South might finally rise again – but it’s not nearly as far-fetched as it once seemed.

How do you think the thirteen million Republican primary voters who voted for Trump will react if the Republican establishment that they despise so deeply takes the nomination away from the man they anointed, a man they valued because he wasn’t one of them? It would make a complete mockery of the arduous year-long dog and pony show of a primary and prove once and for all that their opinions mean nothing to the powers that be – a suspicion which largely is why they chose Trump in the first place. This exercise in forcing the Republicans to face their own hypocrisy, while amusing for the rest of us, truly shows just how convoluted and dangerous their obsession with the Second Amendment is – and how much blood stains their hands.

You can sign the petition here, if you want.

Colin Taylor
Opinion columnist and former editor-in-chief of Occupy Democrats. He graduated from Bennington College with a Bachelor's degree in history and political science. He now focuses on advancing the cause of social justice and equality in America.
Latest Posts
Tags
cleveland gun free zone RNC style Trump